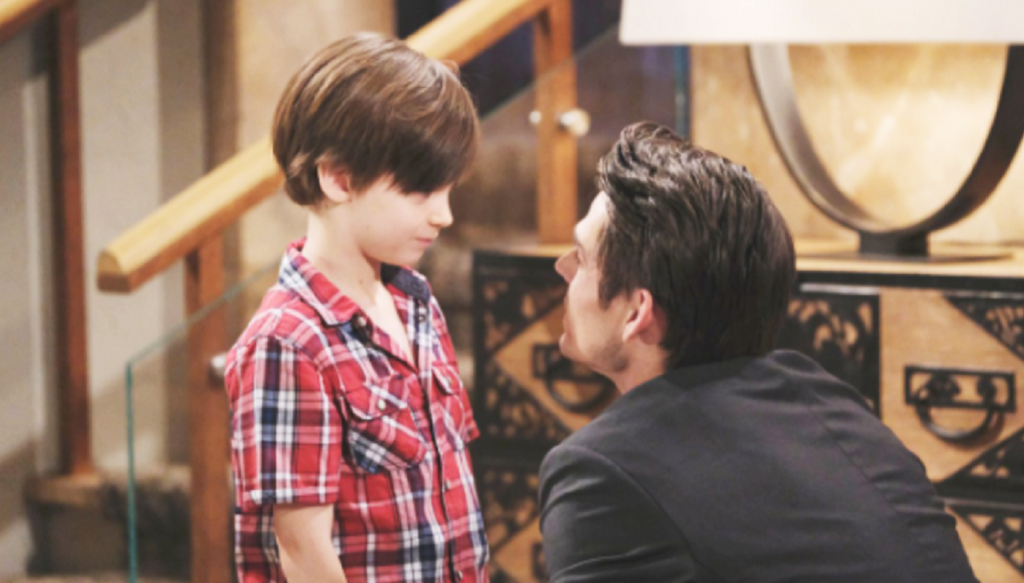 The Young and the Restless (Y&R) spoilers tease that Chelsea Newman (Melissa Claire Egan) will worry about her ex-husband Adam Newman’s (Mark Grossman) dark side as he renews and builds his bond with their young son Connor Newman (Judah Mackey).

Connor Newman is the older of Adam’s two sons, and Chelsea is his mother, as opposed to his younger son Christian Newman (Alex Wilson) whose mother was Sage Warner (Kelly Sullivan). So far, Adam’s interactions with Connor have been innocent and fun, and Connor has seemed to enjoy being with his father and has started bonding to him.

However, Chelsea knows that Adam has a dark side and she has seen it. She knows in his past he blackmailed Dr. John Taylor (John Rubenstein) who was an older man, and the stress of the blackmail caused his death. He also gas-lighted Ashley Abbott, (Eileen Davidson) causing a mental breakdown.

Adam also faked his own death and framed his brother Nick Newman (Joshua Morrow) for it. Most recently, he tried to get custody of Christian away from Nick and confused Christian by telling him he was his father when Nick was the only father he’d ever known.

The Young and the Restless Spoilers: Billy Has DID, His Dark Side Comes Out, Chloe In Danger? @celebratesoaps #yr #Youngandrestlesshttps://t.co/MBJnrPdGtW

Chelsea is worried about Connor, but she should be worried about herself as well. Adam’s also been accused of several murders, and unbeknownst to Chelsea, he is trying to kill his own father by tampering with his medication, swapping them for double dose capsules he had made up.

Chelsea may need to consider what kind of influence that Adam will be on Connor as he gets older. It is possible that Nick Newman might try to talk some sense into her concerning Adam and Connor since she is involved with him now, and even though she may fight it at first she needs to realize how dangerous Adam is even though he puts a sweet face on around Connor and has in front of Christian too. There is more reason for Nick to not have wanted Adam to have custody of Christian than just sibling rivalry,.

Young And The Restless Spoilers – Adam Newman Does Have A Conscience

After all, Adam appears to be a dangerous narcissist, although he does seem to have some conscience peeking through once in a while. Y&R viewers saw this when he witnessed his father, Victor Newman (Eric Braeden) become confused and weak after taking the medicine he swapped out.

He did seem to worry a bit and Phyllis Newman (Michelle Stafford), who had hacked into Dr. Nate Hastings’ (Sean Dominic) hospital tablet which Adam “borrowed” to get his father’s medical records told him it was normal to have a heart, and it was OK.

Will Chelsea begin to realize, that based on his many years of aberrant and dangerous behaviors, Adam is not someone that would be safe with even his own son, and that even if Adam doesn’t harm Connor, as Connor matures Adam could be a bad influence on him? Something will definitely cause Chelsea to see Adam’s dark side for what it is and she will begin to worry about how it will affect their son!

Stay tuned to The Young and the Restless and keep checking Y&R spoilers frequently for all the latest news, updates and developments!