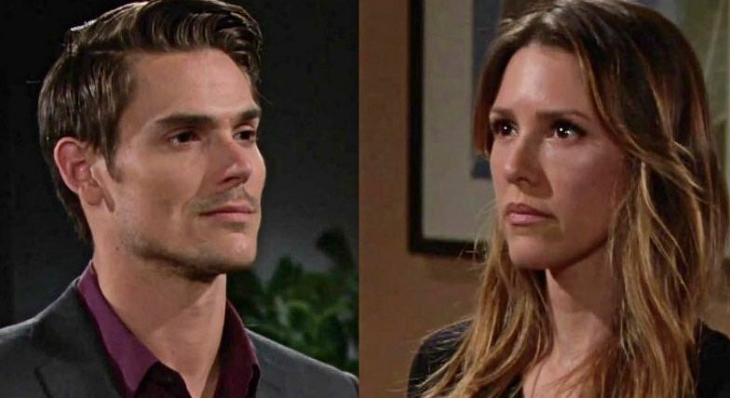 Adam Newman (Mark Grossman) isn’t involved in a battle against Chloe Mitchell (Elizabeth Hendrickson) on ‘The Young and the Restless’. No, Kevin Fisher (Greg Rikaart) is also in the middle of this fight, which is why Team ‘Khloe’ is an apt choice for this feature’s headline and second answer to its poll question.

Of course, Billy Abbott (Jason Thompson) still stands with Chloe and Kevin in this long-term war as well. So he’s part of the ‘Khloe’ team as well.

It had been just over thirty-four months since Chloe and Adam last spoke to each other, in front of the audience, one-on-one. At that time she was holding him hostage at the cabin in the woods and that version of the character Chloe detests looked like Justin Hartley.

In what is Y&R’s fourth adult version of Adam, Grossman is playing the infamous character to the hilt. He’s hit hard on all cylinders during the weeks since his debut. Solid kudos to this recast, both in the actor choice and in reverse SORAS’ing Adam, which makes him chronologically accurate.

Y&R Spoilers– Are You Team Adam?

It was great to see Hendrickson again. This superb daytime veteran’s return nearly completes the power arc that first exploded in October 2013. The final major player piece is Chelsea Lawson (Melissa Claire Egan), who is soon set to be seen on screen again.

Adam’s write-back to Genoa City represents a major philosophy shift at Y&R. Bringing this specific character back, along with his connected foes, means that the decision-makers believe there is much juice left in the classic confrontation that pitted a grieving mother, Chloe, her true love, Kevin, and the father of the little girl who was lost, against the man who is said to have accidentally run down Delia Abbott (Sophie Pollono) going on six years ago.

Yes, Billy Abbott (Jason Thompson) will be re-primed to hunt Adam. Chloe’s reveal of herself, in still being alive, serves to pull Billy back to the dark side of loathing where he wallowed for years when previously enveloped by Adam’s shadow.

Young And Restless Spoilers– Do You Think Billy Will Attack Adam?

Adam’s reference of Bella Mitchell (Cali May Kinder) was his way of taking what Kevin had mentioned and using that psychology with Chloe. Kevin used Bella’s name, which convinced Adam to release Chloe.

Adam then used Bella’s name to try and persuade Chloe to release her rage. He genuinely doesn’t want his nemesis to lose her second daughter, by going to prison, or worse, after he’s already taken Delia from her.

Today's the day! Don't miss Chloe and Kevin together again on #YR. 👏 pic.twitter.com/p9p0E9omKC

So, the setup seems to be a shift. Adam has admitted to not knowing why he continues to live a miserable existence and implores Chloe to focus on what she has, while he remains silent about her faked death as a form of a gift. But is that enough to make viewers support Team Adam?

Fans of ‘The Young and the Restless’ rightfully express their opinions on a regular basis. So, is it Team Adam, or Team ‘Khloe’ and Billy that viewers support? Please vote in our poll below!

Days Of Our Lives Spoilers: Ciara And Tripp Plan Hits A Snag– Claire’s Fit Of Rage Puts Their Lives In Danger