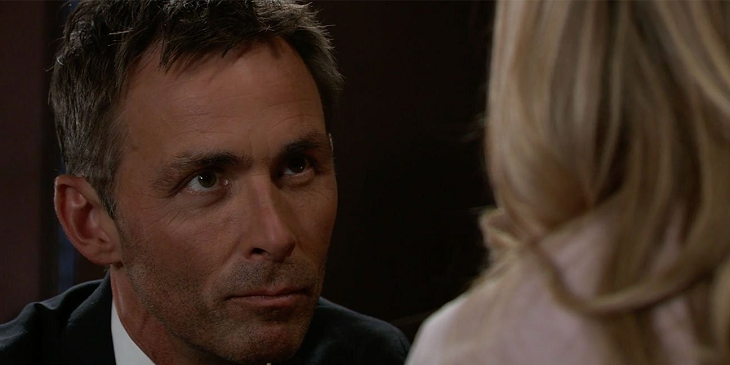 General Hospital spoilers tease that Valentin Cassadine (James Patrick Stuart) will be dismayed in Friday, June 28! As General Hospital viewers know, there are a few things that Valentin could end up dismayed over, but this will probably relate to the new issue of Jasper Jacks (Ingo Rademacher) and his being much, much, too hands-on at Crimson, and spending much, much, too much time around Valentin’s woman, Nina Reeves (Cynthia Watros) as a result!

General Hospital viewers should recall an episode from a couple of weeks ago, where Jax was warned about Valentin by two different people, Alexis Davis (Nancy Lee Grahn) and Mayor Laura Webber (Genie Francis). Jax responded to both that he wasn’t too concerned about Valentin and that he could handle him. Could it be that while Valentin has hired Curtis Ashford (Donnell Turner) to investigate Jax, that Jax has hired someone else to investigate Valentin, and Curtis finds out and brings this news to Valentin in Friday’s episode, or will Jax confront Valentin himself with his findings?

GH Spoilers– Did Jax Find Out That Sasha Is Nina’s Fake Daughter?

One big secret Valentin wouldn’t want Jax finding out about would be Sasha Gilmore (Sofia Mattsson), who Valentin apparently found and hired to be Nina’s long-lost daughter. However, many General Hospital viewers think Sasha could still be a relative to Nina because of her uncanny resemblance to Nina’s cousin, Britt Westbourne (Kelly Thibaud).

There never was an encounter from even across a room between Britt and Sasha, although Liesl Obrecht (Kathleen Gati) seems to know a lot more about Sasha then she should and let something slip a few months back, with an extreme disdain on Liesl’s part of Sasha, although Sasha didn’t recognize her. So that mystery is still out there to be solved and many General Hospital viewers wonder if it ever were!

General Hospital Spoilers– The Secret Could Be Tied To Peter, Too?

That is the main secret that Valentin would worry about Jax finding out about and using it to break him and Nina up; now that their wedding has been postponed to September, Valentin has the rest of the summer to figure out how to keep that from happening if it hasn’t already!

"Is there something wrong with our baby?!?" #GH pic.twitter.com/Fp3tJctIrx

Another secret that Valentin could be keeping would be his causing harm to Cassandra Pierce (Jessica Tuck) or perhaps his knowledge that other Cassadine relatives may be alive and be the owner of the mysterious Cassadine hand on her knee; or it could be secrets having to do with the conception and birth of Peter August (Wes Ramsey) and who was really his mother, but this is doubtful since Valentin wouldn’t have known if it was Anna Devane (Finola Hughes) or Alex Marick (Finola Hughes) he followed at the time either; back then he didn’t know Anna had a twin!

Besides, Anna is off trying to solve that mystery herself! What will Valentin be dismayed about? Will it be some secret Jax has found out, or will Nina postpone their wedding even further than September?