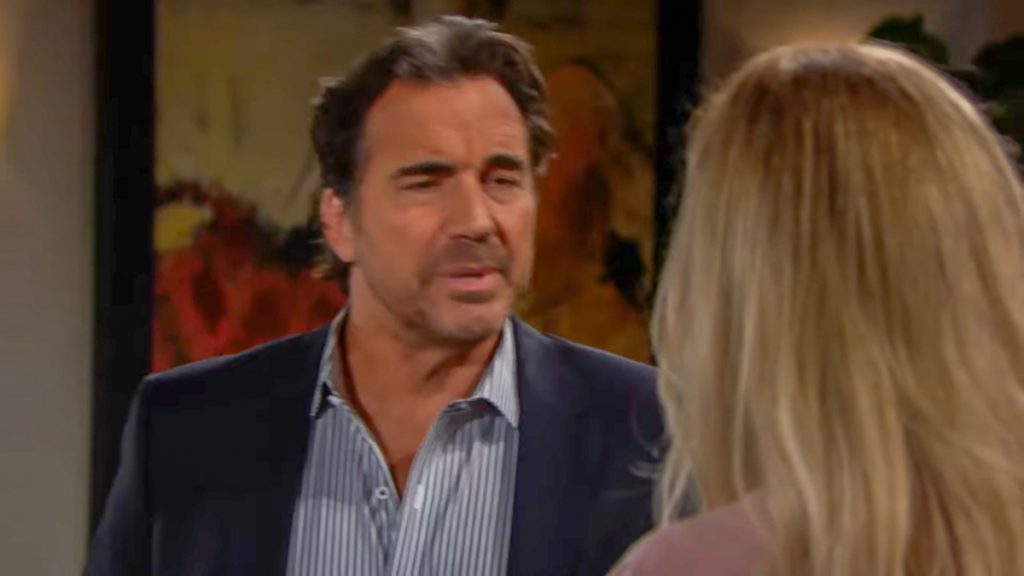 The Bold and the Beautiful spoilers for Monday, November 11, tease that Ridge Forrester (Thorsten Kaye) and Brooke Forrester (Katherine Kelly Lang) will feel like they’ve reached an impasse in their argument over Thomas Forrester (Matthew Atkinson)…and in their marriage as well. As B&B viewers know, Brooke and Ridge just don’t see eye-to-eye where Thomas is concerned, and it’s the main source of conflict in their marriage right now.

Brooke sees Thomas as an unhinged manipulator, and she simply can’t and won’t forgive him for keeping the secret about Beth Spencer (River Davidson and Madeline Valdez) from Hope. She is also angry at Thomas for manipulating Hope into marrying him, and she feels that he’s an unfit father to Douglas Forrester (Henry Joseph Samiri). Ridge obviously disagrees with all of this, but he’s been completely unable to disabuse Brooke of her beliefs.

Bold & The Beautiful Spoilers – Bridge’s Marriage Is On The Line

On Monday’s episode of B&B, it seems that Brooke and Ridge will have a major where-do-we-go-from-here moment, and they’ll realize that they are at a complete stalemate. They won’t be able to make any progress in their argument over Thomas, and they’ll realize that something’s going to have to give if their marriage is to survive. The only problem is that neither of them will be willing to budge from their positions.

Meanwhile, on Monday’s new episode of B&B, Hope Logan (Annika Noelle) will continue her panicked search for Douglas at Forrester Creations. As B&B viewers know, Thomas put Douglas somewhere within the Forrester building, but Hope doesn’t know where he is. She’s deeply concerned for Douglas’ safety, and it looks like she’ll end up finding him safe and sound.

That will no doubt be a great relief for Hope, who will be glad to be reunited with Douglas. And she’ll be happy that Thomas signed the adoption paperwork giving her joint custody of the little boy as well. But it looks like Hope will soon have another problem on her hands when she can’t find Thomas anywhere.

As B&B viewers know, Hope’s last interaction with Thomas was pretty tense. She and Thomas were on a catwalk in the industrial area of Forrester where a large vat of steaming liquid was sitting below. Thomas leaned in for a kiss, and Hope shoved him aside to get away from him, but in so doing, she pushed him over the edge of the catwalk and he fell into the vat of liquid.

Of course, B&B viewers had been led to believe that the liquid in that vat was hydrochloric acid, since Jack Maclaine (Todd McKee) was using the acid to clean the industrial washing machine elements. But we should note that Thomas soon floated to the top of the vat and he certainly didn’t look like he was being burned, so it’s possible that the liquid in the vat was not acid and was just water.

At any rate, B&B spoilers say that Hope will fear the worst when she can’t find Thomas. Will she wind up searching back in the industrial area of Forrester for Thomas and realize that he might have fallen in the vat? She might remember shoving Thomas on the catwalk and worry that a terrible tragedy might have occurred. But will she tell anyone her concerns?