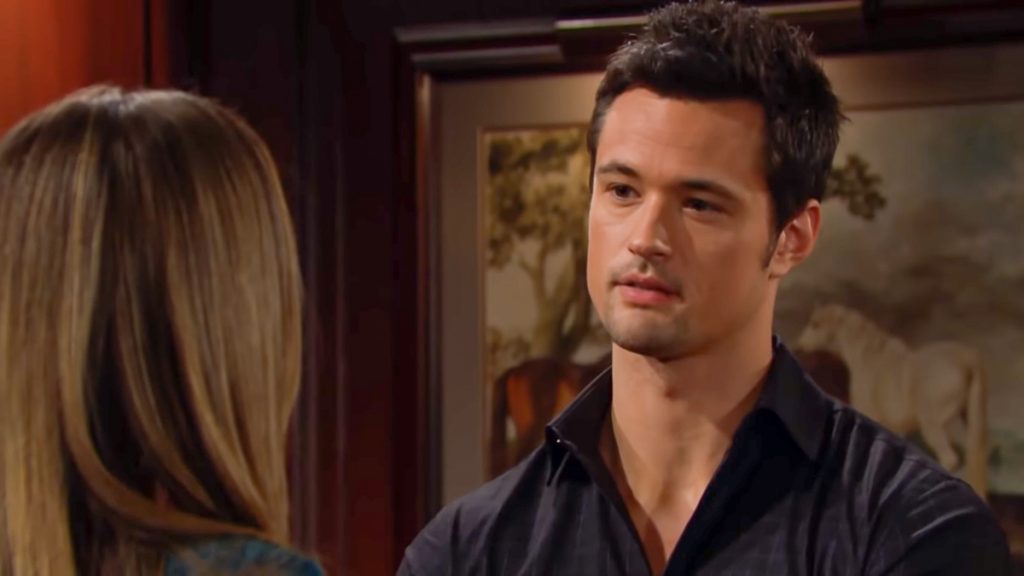 The Bold and the Beautiful spoilers reveal Thomas Forrester (Matthew Atkinson) survived his fall. Hope Logan (Annika Noelle) assumes his body dissolved in hydrofluoric acid. However, the chemical jacuzzi wasn’t fatal. It is speculated that he could be scarred for life, though. His face could now look just as terrifying as his mind.

Even though hydrofluoric acid can be fatal, Thomas didn’t lose his life like Hope believes. At some point between his fall and Hope returning, he managed to get out of the enormous chemical container. Fans saw his body fall in the liquid and he was completely submerged. Moments later, his body floated to the top, but his eyes were closed. This means his entire body, including the face, was soaked with the dangerous compound.

The Bold and the Beautiful spoilers confirm that Hope thinks Thomas’ body completely dissolved in the substance within minutes. However, that isn’t exactly how the chemical works. According to the Centers for Disease Control (CDC), there are a lot of factors in how hydrofluoric acid (called hydrogen fluoride before its added to water) affects the human body.

How long the body was in contact with the chemical is a major determining factor. Although Thomas was submerged head-to-toe, he wasn’t in the vat for very long. He is also young, healthy and has no pre-existing health conditions.

“The seriousness of poisoning caused by hydrogen fluoride depends on the amount, route and length of time of exposure, as well as the age and pre-existing medical condition of the person exposed.”

These all contributed to his survival. However, that doesn’t mean he won’t suffer.

The chemical seeps into the skin very quickly and targets the internal organs. He could have serious internal issues and might not even know it right now. His lungs and heart could also be damaged from the compound. There is also a chance that he could end up blind.

As for physical symptoms of hydrofluoric contact, the website states that the skin will show some pretty grotesque signs of damage. Everything will seem fine for several hours. Between 12-24 hours, the individual will appear to have severe burns. Then, those burns will develop into skin ulcers.

If he ends up physically scarred, blind and in constant agony from the chemical bath, it could be the price for his devious deeds. It might be what it takes to punish this character.

However, if his soul and mind are truly evil, then his outward appearance would finally match his insides — showing the world that he is a real-life monster. Sinister, soulless, someone to be feared.