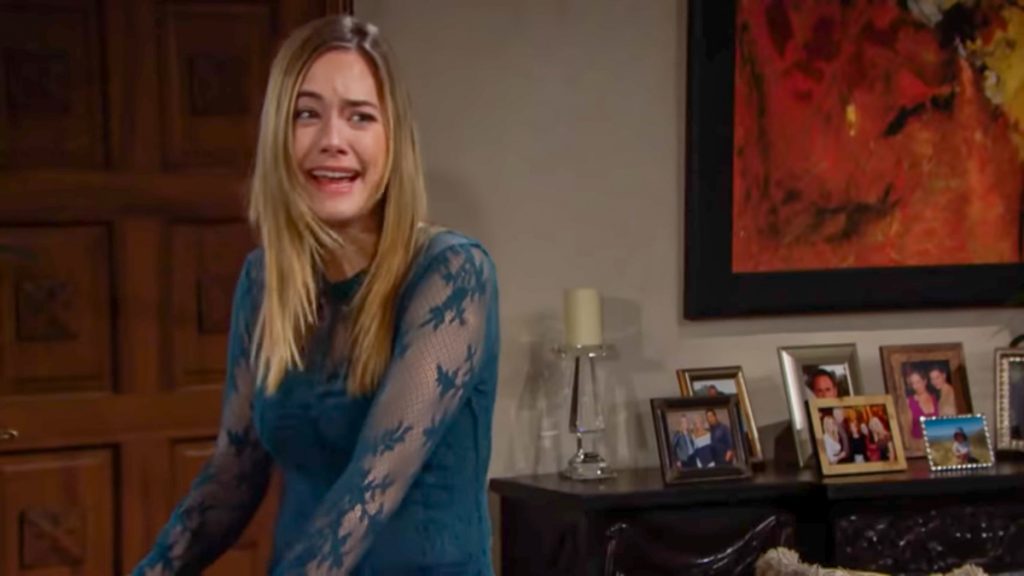 The Bold and the Beautiful spoilers for Wednesday, November 13, tease that we’re in for some exciting developments. We should note that CBS is currently planning to preempt Wednesday’s B&B episode due to the impeachment hearings. But in the event the episode airs, the following is a summary of what you can expect to happen.

According to B&B spoilers, Hope Logan (Annika Noelle) will be feeing intense guilt over what happened earlier in the evening to Thomas Forrester (Matthew Atkinson). As B&B viewers know, Hope pushed Thomas and he fell over a catwalk into a vat of what she believes was hydrofluoric acid. Hope believes that Thomas’ body was completely disintegrated, and she feels terrible about the whole thing.

Well, Brooke Forrester (Katherine Kelly Lang) has just heard the whole story about what happened from Hope, and according to B&B spoilers, she’ll comfort her daughter and tell her not to worry about what’s happened. It seems that Brooke will tell Hope that what happened was a terrible accident, and that it never would have happened if Thomas hadn’t been chasing her in the first place. She’ll urge Hope to keep what happened between them, so that no one ever finds out.

Of course, if anyone did find out about the incident, then Hope could very well be on the hook for attempted murder, and she’d surely lose custody of Douglas Forrester (Henry Joseph Samiri), which is something that she worked hard to get. Brooke will insist that Hope keep quiet about what happened, and she’ll tell her daughter that everything will be ok as long as no one finds out the truth.

But that could be easier said than done. Hope will soon encounter Liam Spencer (Scott Clifton), who will naturally want to know how things went with Thomas. Liam knows that Hope was with Thomas and Douglas at Forrester Creations. According to B&B spoilers, Hope will reveal to Liam that she’s now Douglas’ adoptive mother, and that Thomas signed off on the paperwork.

Well, this news will stun Liam, who probably didn’t think Thomas would ever sign the adoption papers. He’ll probably press Hope with questions about how everything transpired, and she’ll most likely give him a watered-down version of events, saying that Thomas agreed with her that Douglas would be best served to have two parents. But Hope won’t let Liam know what happened after Thomas signed off on the papers.

B&B spoilers also indicate that Liam will give Hope some news as well. He’ll let her know that he’s decided to go back to work with Bill Spencer (Don Diamont) at Spencer Publications. That news will likely surprise Hope, given Liam’s history with Bill, but it certainly won’t be the most pressing thing on Hope’s mind. It seems that she’ll be too overwrought with guilt and fear about what’s happened with Thomas to give the matter much thought.