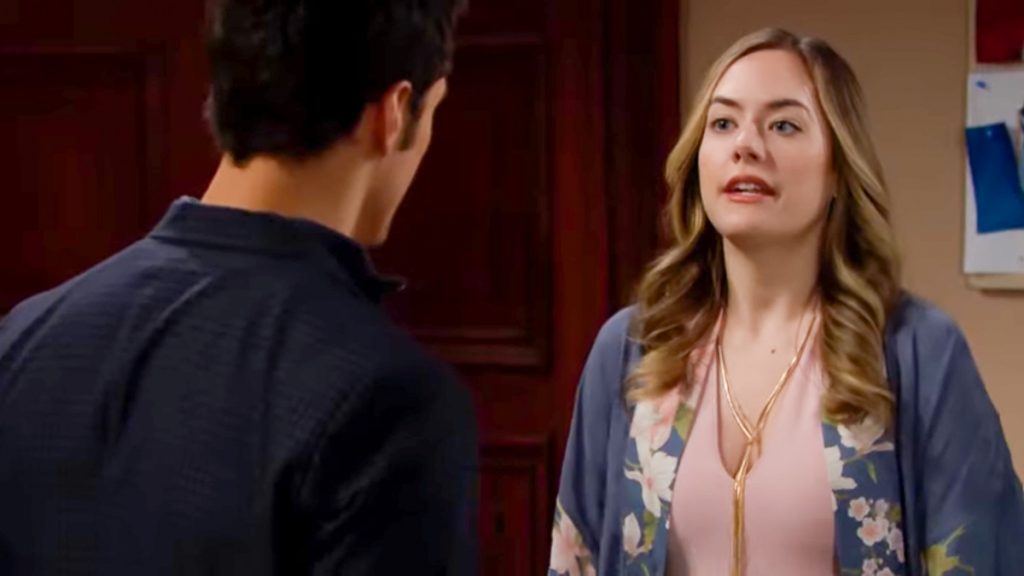 The Bold and the Beautiful spoilers for Wednesday, December 11, tease that Thomas Forrester (Matthew Atkinson) will have a big proposition for Hope Logan (Annika Noelle). As B&B viewers know, Hope is currently considering returning to Forrester Creations and revitalizing Hope For The Future, which is her fashion line. Unfortunately, the line has really taken a backseat since Hope hasn’t been working much lately. But Thomas wants that all to change, and for Hope to resurrect the line with him as lead designer.

But it looks like before Hope can give an answer about that, Thomas will have another idea for her to consider. According to B&B spoilers, he’ll talk with Hope again and suggest that she not only reinstate the Hope For The Future fashion line, but that she engage in a fashion competition. He’ll have this big idea for the two of them to team up and compete against Steffy Forrester (Jacqueline MacInnes Wood) and her design team.

As B&B viewers may know, Steffy has been working on her own line, and it looks like the fashion competition will ultimately be a go, with Steffy and Sally Spectra (Courtney Hope) teaming up against Hope and Thomas. It should be an interesting situation, and it will definitely bring Thomas and Hope together…which is exactly what Thomas wants.

Meanwhile, on Wednesday’s new episode of B&B, Shauna Fulton (Denise Richards) will have a stunning admission for Ridge Forrester (Thorsten Kaye). Ridge will be feeling heartbroken after his conversation with Brooke Forrester (Katherine Kelly Lang). As B&B viewers know, Ridge went to Brooke and begged her to forgive Thomas so that they could avoid a divorce and get their marriage back on track.

But Brooke flatly refused to forgive Thomas, and she even countered by saying that Ridge needed to basically adopt her viewpoint on Thomas in order for their marriage to survive. Of course, that’s something that Ridge just isn’t going to do, as he’s never going to turn his back on his son…just as Brooke would never turn her back on one of her children.

Well, whether it will happen on- or off-screen, B&B spoilers indicate that Ridge and Brooke will indeed sign the divorce papers, ending their marriage. And it looks like that will be heavily on Ridge’s mind as he returns to the Forrester mansion and encounters Shauna. There, Shauna will offer him emotional support as he recounts what happened with Brooke.

And so what about this stunning admission that Shauna will make? Given that Shauna has already told Ridge that she loves him, she’ll likely have something else to admit to Ridge. Perhaps she’ll let Ridge know that deep down she’s glad about his breakup with Brooke – not because he’s suffering, but because it means that there’s a chance for the two of them to get together. At any rate, it looks like Shauna will once again be there for Ridge as he faces devastation.