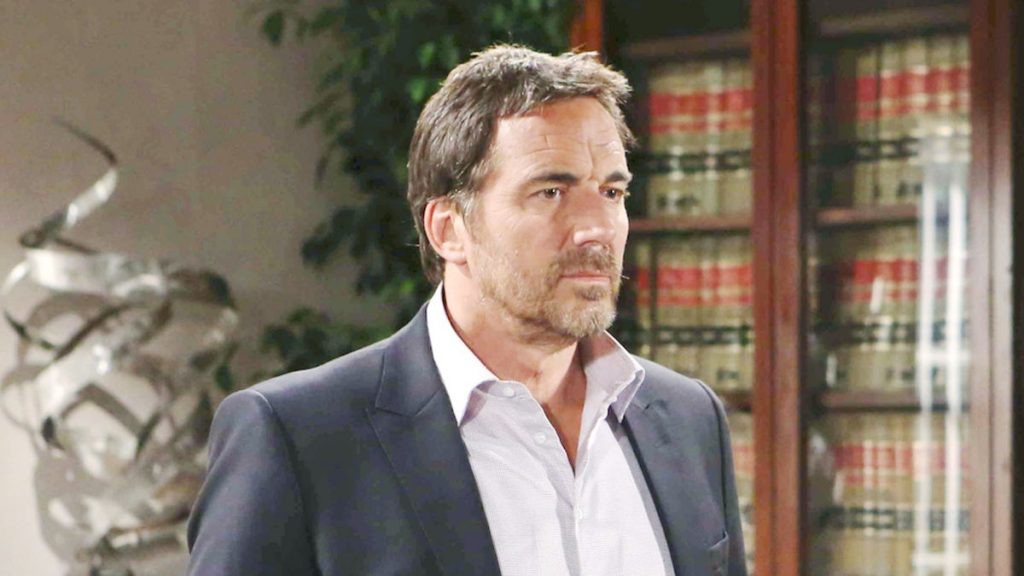 The Bold and the Beautiful spoilers for Tuesday, September 10, tease that Ridge Forrester (Thorsten Kaye) will find himself in a terrible position. As B&B viewers know, he’s just heard from Detective Alex Sanchez (Jeremy Ray Valdez) that Flo Fulton (Katrina Bowden) is up for an immunity deal for her actions in connection with Reese Buckingham’s (Wayne Brady) kidnapping and illegal adoption scam. That initially made Ridge furious, but then he learned from Detective Sanchez that if Flo avoids a trial, there will be virtually no way for Thomas Forrester’s (Matthew Atkinson) actions to be made public.

So, if the Forrester family agrees with the DA’s decision to drop all charges against Flo Fulton, then all of the terrible things that Thomas did – including threatening people, trying to run Emma Barber (Nia Sioux) off the road, and keeping the secret about Beth Spencer (River Davidson and Madeline Valdez) – will probably stay private and won’t make it into the news and the tabloids. As B&B viewers know, Ridge wants the best for his son, and he doesn’t want his family’s business dredged up in the press.

And so according to B&B spoilers, Ridge will make the difficult decision to officially agree to let Flo get her immunity deal in order to protect Thomas from public scrutiny. Of course, this will weigh heavily on Ridge, since he’s been railing against Flo for her crimes for weeks now. He’s wanted nothing more than for Flo to pay for her role in Reese’s scam. After all, Flo liked straight to Steffy Forrester’s (Jacqueline MacInnes Wood) face and pretended to be the birth mother to “Phoebe Forrester,” and she let Steffy raise a baby that she knew belonged to Hope Logan (Annika Noelle) and Liam Spencer (Scott Clifton).

Look for Ridge to be seriously conflicted about his decision, and about the fact that he’ll now have to go tell Brooke Forrester (Katherine Kelly Lang) that he agreed to Flo’s immunity deal and why he did it. According to B&B spoilers, Brooke will spend time on Tuesday’s episode making her feelings about Thomas known to someone, and that will almost certainly include the belief that Thomas should pay for his actions.

Of course, Brooke is furious with Thomas for how he manipulated and used Hope, and she won’t be happy to hear that he’s avoiding prosecution. And she’ll probably be even angrier to learn that Ridge made a decision that let Flo go free from prosecution in order to protect the likes of Thomas. It’s not going to be a good scene when Ridge finally tells Brooke what he did.

Next, on Tuesday’s new episode of B&B, Flo will get an unexpected visitor in jail. Steffy will pay her a visit, and according to B&B spoilers, it won’t be a pleasant interaction. Of course, for Steffy, Flo has a lot of explaining to do. After all, she pretended to be the birth mom for the baby that Steffy referred to as Phoebe for many months, which means that Flo lied directly to Steffy’s face on numerous occasions.

Steffy’s going to have some words for Flo, and according to B&B spoilers she’ll blast Flo for her deception and for breaking so many people’s hearts. She’ll probably start by pointing out how cruel and inhumane it was to let Hope and Liam go on for months believing that their daughter had died. And then Flo’s actions allowed Steffy to take “Phoebe” into her home and bond with her as her mother. Flo should get an earful as Steffy confronts her for everything she did.

Ultimately, Steffy will have her say, and she’ll end up telling a distraught Flo that she hopes she ends up rotting in prison for the rest of her life – right where she deserves. Of course, neither Steffy nor Flo will know yet about the immunity deal that’s about to go down for Flo, so it will look like Flo’s going to remain in jail for the foreseeable future. One wonders how Steffy will feel about her father signing off on Flo’s deal.