The Bold and the Beautiful Spoilers: Shauna Inspires Daughter – Flo Won’t Give Up On Wyatt 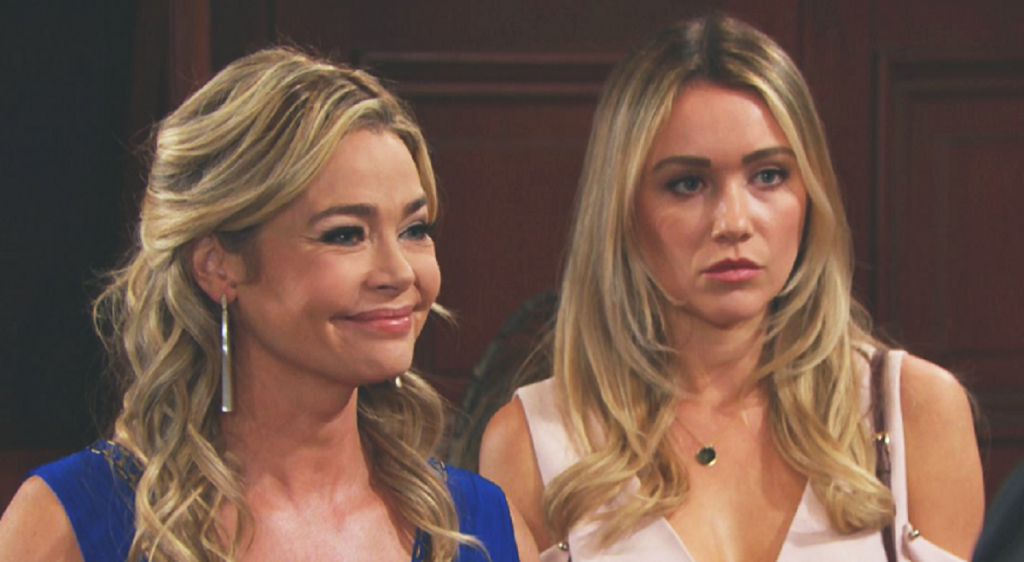 Shauna Fulton (Denise Richards) remains optimistic on ‘The Bold and the Beautiful’. She believes in her daughter and in herself.

The lifestyle both ladies experienced for a brief amount of time left a sweet taste in Shauna’s mouth. That’s why the setback Flo Fulton (Katrina Bowden) suffered when outed through the Beth Spencer (Madeline Valdez and River Davidson) reveal isn’t seen as an ender. Instead Richards’ fun character believes that better days lie ahead.

B&B fans were introduced to Flo through her link to Reese Buckingham (Wayne Brady). He eventually became the notorious doctor who stole Hope Logan (Annika Noelle) and Liam Spencer’s (Scott Clifton) baby. He sold Beth to Taylor Hayes (Hunter Tylo), who believed that a so-called private adoption was being facilitated for her daughter, Steffy Forrester (Jacqueline MacInnes Wood).

Flo and Wyatt Spencer (Darin Brooks) ran into each other at Bikini Bar, which served as the fan’s notice that they were former high school sweethearts in Las Vegas, Nevada. Wyatt and Quinn Forrester’s (Rena Sofer) backstories were lengthened as a result.

Shauna and Quinn were best friends in Vegas, while their children were in school. Flo didn’t expect Wyatt, or Quinn to take kindly to all that’s happened. They haven’t, but the Fulton’s also weren’t totally shut down. The long-term connection that exists between this quartet still counts.

A handful of weeks ago, Quinn and Shauna were on the same page. They believed, rightly, that Flo and Wyatt’s renewed relationship was deepening and a marriage would eventually be realized.

Beth’s reveal stopped that trajectory. Actually, one of the more descriptive past participles that could have been used in the last sentence, instead of stopped, would have been altered. Points to readers for accepting cheeky grammar usage within this daytime post.

Wyatt’s response to Flo’s apology at his office, on the day she was released from jail, lacked anger. That’s because a large part of his heart is still affected by Bowden’s character.

Quinn’s enduring stance against Sally Spectra (Courtney Hope) matters. She, like Shauna, wants Wyatt to be with someone different. If Shauna is able to regain Quinn’s trust, Flo will have a powerful ally pushing Wyatt to give her another chance.

Bold And The Beautiful Spoilers – Balancing Everything That Has Happened

Wyatt previously told Flo that he was sorry for leaving Vegas with his mother without explaining his actions, or saying goodbye. That happened because of Quinn’s pressured business dealings.

Flo forgave Wyatt, which led to their reignited relationship. Sally just did the same thing when she accepted Wyatt’s apology for having ditched her this summer. ‘Wally’ exists again as a result.

Katie's medical crisis shocker stuns family. Will Flo save her life on #BoldandBeautiful?
Read more on this #BB spoiler below👇👇👇https://t.co/yRX6ffOzju

Forgiveness may be possible if Wyatt and Quinn consider all that they did and then consider Flo’s actions and Shauna keeping her daughter’s secret. The issues aren’t similar, but balancing all that’s happened might allow Wyatt and Quinn to reconnect with their friends again. This site is a leading source for everything linked to ‘The Bold and the Beautiful’.