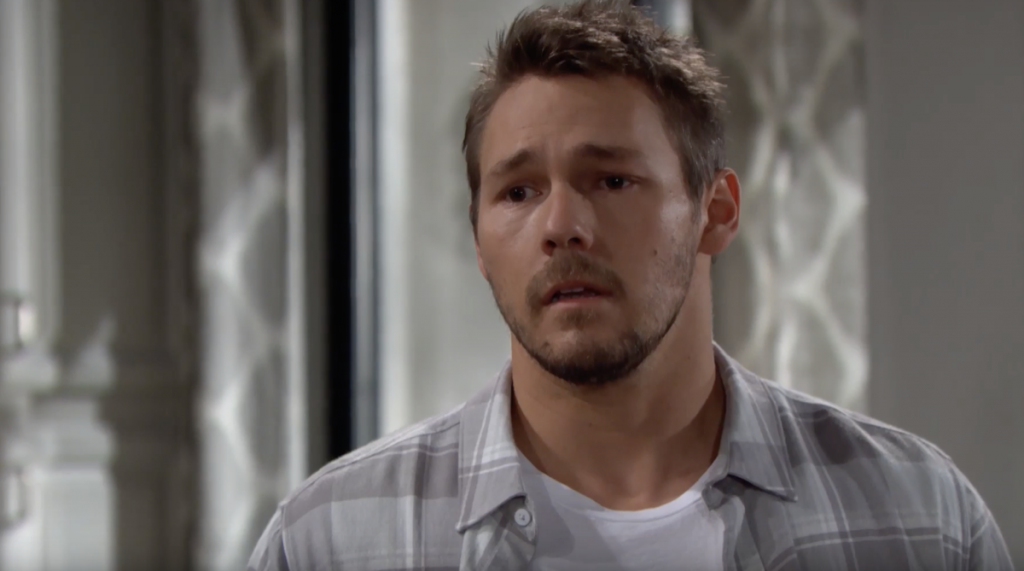 The Bold and the Beautiful spoilers for Thursday, August 1, tease that Liam Spencer (Scott Clifton) is going to be feeling overjoyed about his realization that Phoebe Forrester (River Davidson and Madeline Valdez) is his actually his daughter Beth Spencer.

As B&B viewers know, he’s just put together enough details – thanks to Douglas Forrester (Henry Joseph Samiri) and the call from the Las Vegas hospital – to figure out that Phoebe is Beth.

But once Liam works through his initial feelings of happiness over having his daughter alive, he’s going to find himself on a mission to get answers to the many questions swirling around in his head. He’s deduced that something must have happened to Beth on Catalina Island, on that terrible night when Reese Buckingham (Wayne Brady) so adamantly claimed that Beth had died.

In fact, the more that Liam thinks about the situation, the madder he’s going to get. He’s been lied to by Reese, Florence “Flo” Fulton (Katrina Bowden), Thomas Forrester (Matthew Atkinson), and others, and he’s going to want to unravel this mystery and get to the bottom of how his daughter was stolen from him and how she wound up in Steffy Forrester’s (Jacqueline MacInnes Wood) home.

On Thursday’s episode of B&B, Liam will decide to start looking for answers from Flo. He’s just learned that she didn’t actually give birth in Las Vegas as the birth records claim, and he probably feels that he’ll have a better chance of getting the details out of her than out of Thomas.

So, Liam will go to Wyatt Spencer’s (Darin Brooks) beach house looking for Flo. But he won’t be the only one looking for Wyatt on Thursday’s episode. As B&B viewers know, Flo is determined to find Wyatt and come clean about all of the secrets and lies she’s been keeping about Phoebe/Beth and Thomas.

According to B&B spoilers, Flo will find Wyatt first and she’ll have every intention of confessing everything to him about her role in Reese’s baby swap and adoption scam, and about how Thomas has been threatening her and making her keep the secret against her will.

But as she’s on the verge of confessing everything, Liam will appear at Wyatt’s place and he’ll angrily confront Flo about her deception. He’ll apparently make it clear that he knows that truth – that Phoebe is his daughter Beth – and he’ll demand that she tell him everything.

Of course, Wyatt is going to be stunned by this development, and ongoing B&B spoilers indicate that from here, he and Liam are going to hear a shocking and nearly unbelievable tale, complete with a baby swap, an illegal adoption scam, lots of parties who knew about everything and kept quiet, and the death of Emma Barber (Nia Sioux).

Meanwhile, on Thursday’s new episode of B&B, Thomas will be up to his same old manipulative ways. He desperately wants Hope Forrester (Annika Noelle) to forget about Liam and Beth, at least for one night with him. As B&B viewers know, Thomas and Hope are on their “staycation” honeymoon, and Hope has been resisting Thomas’ romantic advances, but Thomas is getting impatient.

Remember that Thomas has resorted to using drugs to get his way in the past. He drugged Liam’s drink at a recent beach party with the goal of getting him to sleep with Steffy, and the plan worked. And since Thomas has just spoken by phone to Vincent Walker (Joe LoCicero), the friend who supplied him with the drugs, it looks like he just might go down that path again.

On Thursday’s episode, Thomas will meet with Vincent, who will give him a special “gift” for Hope, and he’ll promise that it will be something that Thomas will love. It certainly sounds like that “gift” may be more drugs – drugs that Thomas may slip into Hope’s drink or food, in the hopes that this will make her more accepting of his romantic overtures.

Up to this point, Hope has been very clear with Thomas about not being ready for physical intimacy with him, so if Thomas goes down this road and tries to drug Hope so that she’ll give in to him, he’ll be crossing some serious lines. B&B viewers will have tune in on Thursday to see whether Thomas really does drug Hope, and what happens next.