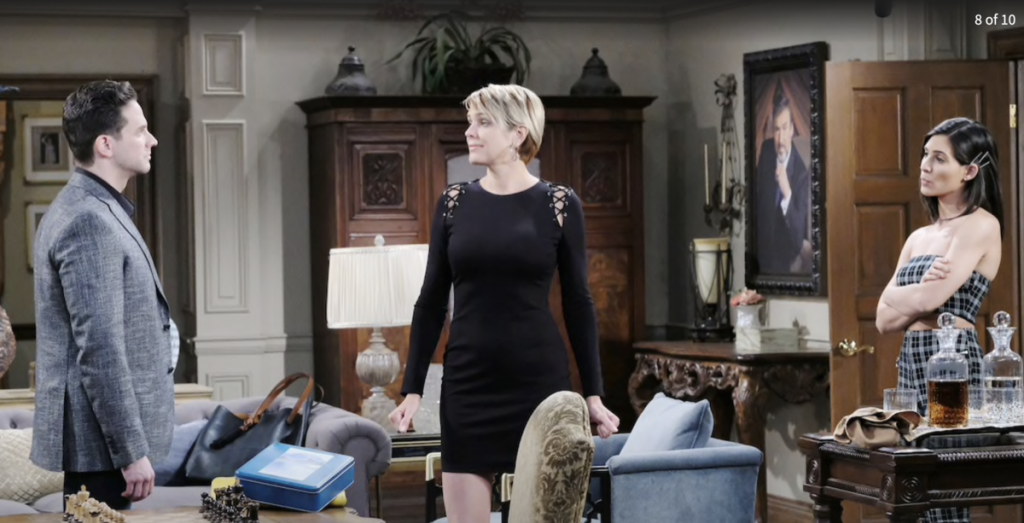 Days of Our Lives spoilers for Thursday, August 1 finds that it won’t be a very good wedding day for Nicole Walker (Arianne Zucker) and Kristen DiMera (Stacy Haiduk). That’s because Kristen will be left furious to find out that her own brother Tony DiMera (Thaoo Panghlis) has pulled a last-minute disappearing act on her.

Also, Stefan DiMera (Brandon Barash) and Gabi Hernandez (Camila Banus) can’t help but wonder what’s going on with Nicole while Will Horton (Chandler Massey) shares with Hope Brady (Kristian Alfonso) what he knows about Ted Laurent (Giles Marini) and the secrets that he might be hiding from her.

Seeing how she doesn’t have many options, Kristen is desperate to control the family business any way that she can. That’s when she decides to put on her Nicole mask and ask her brother Tony to marry her. With Stefan arrested, the timing couldn’t be any better as Kristen is hoping to oust him as the CEO of DiMera Enterprises.

Days of Our Lives spoilers tease that when Kristen realizes that she needs him, Tony is nowhere to be found, leaving Kristen in her Nicole mask absolutely furious. Kristen is running out of allies that she can count on and that’s not a good thing. Elsewhere, it seems as though Stefan and Gabi are on to Nicole as they can’t help but notice her bizarre behavior. Now that they are a married couple, Stefan and Gabi are hoping to stay one step ahead of the game. There’s no way that Stefan will let Nicole climb above him in their race to the top.

Meanwhile, Will wants Hope to know that she needs to keep her eye out on her new boyfriend, Ted. That’s because he’s got some secrets that he’s not willing to share with her. While Hope tells him about all of the events that have happened in the last few weeks, Will delicately tells her to be cautious and to think more carefully about Ted. This not only gives Hope something to think about but also a reason to reconsider her future with the mysterious Frenchman.

Days of Our Lives Spoiler – Sarah Horton Makes A Mistake

Elsewhere, Jack Deveraux (Matthew Ashford) hands Eve Donovan (Kassie de Paiva) her pink slip in their marriage. He also replaces her with Eli Grant (Lamon Archey) as the new police commissioner in Salem. Also, Brady Black (Eric Martsolf) and Sonny Kiriakis (Freddie Smith) can’t help but wonder what’s next for both DiMera and Titan Industries. Sarah Horton (Linsey Godfrey) makes a huge misstep, which might also result in the end of her marriage, too. Of course, fans will have to tune in to find out what will happen next!