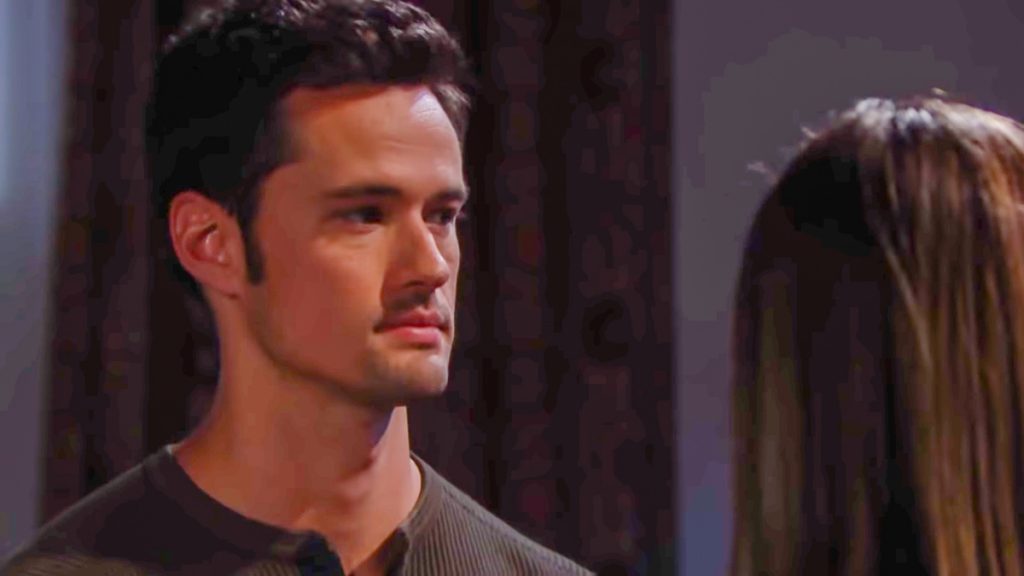 The Bold and the Beautiful spoilers for Monday, November 25, tease that Thomas Forrester (Matthew Atkinson) will have the upper hand. As B&B viewers know, he’s just revealed himself to Hope Logan (Annika Noelle), who was stunned to discover that he was alive. Hope was under the impression that Thomas fell to his death at Forrester Creations after she accidentally pushed him into a vat of hydrofluoric acid.

But Brooke Forrester (Katherine Kelly Lang) doesn’t yet know that Thomas is alive and well. As B&B viewers know, Brooke urged Hope to keep Thomas’ death a secret, because she was afraid that Hope might be accused of murder and end up doing time. Brooke even stopped Hope from telling Ridge Forrester (Thorsten Kaye) about what happened to Thomas.

Well, as B&B viewers know, Brooke finally decided on her own to tell Ridge the truth about the accident and about Thomas’ “death.” On Monday’s B&B episode, she’ll show up at the Forrester mansion to tell Ridge what she believes is the truth – that Thomas is dead. But before she’s able to get the words out, it appears that Thomas will appear at the mansion himself.

It should be quite the scene as Brooke lays eyes on Thomas for the first time. She’ll be stunned to see that he’s alive, and her shock will probably quickly turn to anger as she realizes that he’s been ok this whole time while she and Hope were under the belief that he was dead.

Unfortunately for Brooke, she really won’t have much credibility being righteously indignant toward Tomas when she herself has been keeping a horrible secret from Ridge, and Thomas will know it. According to B&B spoilers, Thomas will taunt Brooke to come clean with Ridge, while Ridge stands there wondering what on earth everyone is talking about.

According to ongoing B&B spoilers, Ridge will be blindsided to learn the truth from Brooke about how she has believed Thomas to be dead for a full 24 hours and didn’t say a word about it to him or to Steffy Forrester (Jacqueline MacInnes Wood). Ridge will be floored by the truth, and he’ll ultimately leave Brooke over the secret.

Other B&B spoilers for Monday’s episode say that Shauna Fulton (Denise Richards) will again emerge as a source of support for Ridge when Brooke can’t be. It doesn’t look like Shauna will be present when Thomas returns and is confronting Brooke, so she’ll probably have left the Forrester living room by then.

Shauna might offer support to Ridge before Brooke arrives at the mansion. As B&B viewers know, she’s been lending an ear to Ridge and giving him encouragement about his parenting skills and letting him vent about his troubles. And perhaps she’ll offer some words of wisdom before everything goes down with Brooke and Thomas.