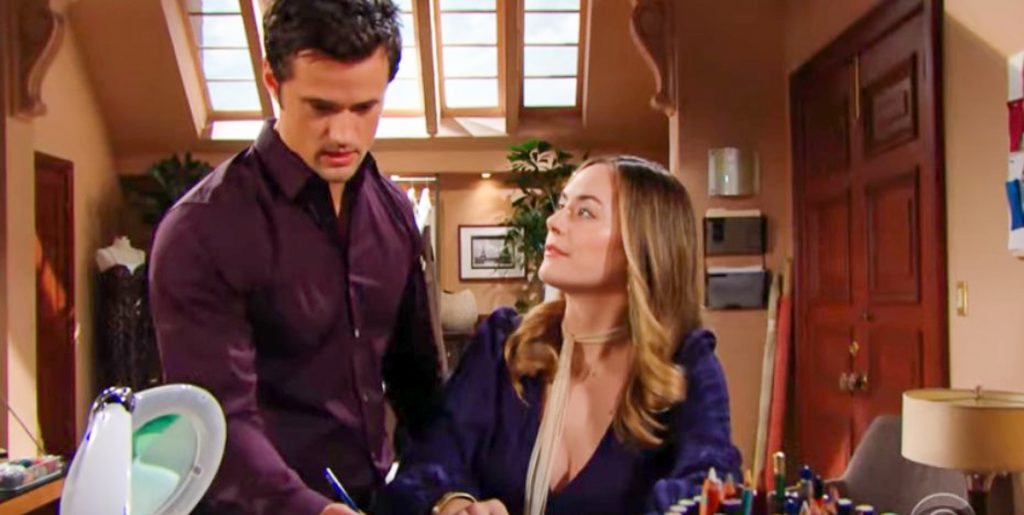 The Bold and the Beautiful spoilers for Monday, December 23, tease that Thomas Forrester (Matthew Atkinson) will be feeling pretty confident. As B&B viewers know, he’s got a big ruse going on right now involving Hope Logan (Annika Noelle) and Zoe Buckingham (Kiara Barnes), and so far it looks like things are totally going his way.

Thomas has gone out of his way to convince Hope that he’s moving on romantically with Zoe, and while Hope is still a bit skeptical about it, the ruse seems to have worked in one respect, since Hope recently agreed to work with Thomas on her fashion line. And that’s exactly what Thomas wanted…for Hope to work with him on the fashion showdown so they could eventually get closer.

Thomas will be thinking that his plan is already proving fruitful, but there is something critical that he doesn’t know. He doesn’t realize that Liam Spencer (Scott Clifton) has his own plan in place to get to the bottom of what Thomas is up to. B&B viewers will remember that Liam convinced Steffy Forrester (Jacqueline MacInnes Wood) to rehire Zoe at Forrester Creations for a reason – so that Zoe could spy on Thomas.

So Thomas currently has no idea that the woman he’s currently romancing has a deal with Steffy and Liam to spy on him and figure out what his true intentions are with Hope. But at the same time, Liam and Steffy really have no idea whether Zoe is going to come through for them. Might Zoe double cross Steffy and Liam as she starts to develop romantic feelings for Thomas?

Meanwhile, on Monday’s new episode of B&B, Brooke Forrester (Katherine Kelly Lang) will find herself on the receiving end of a request. As B&B viewers know, she’s currently at the Forrester mansion talking with Ridge Forrester (Thorsten Kaye). And since she’s been there, she’s learned that Thomas is in a new relationship with Zoe – something that came as a big surprise to her.

And that will give Ridge an idea. On Monday’s B&B episode, he’ll float the idea with Brooke that perhaps they can get their marriage back on track. After all, since Thomas no longer poses a threat to Hope, he’ll think that there’s no reason why Brooke shouldn’t forgive him and give their marriage another shot.