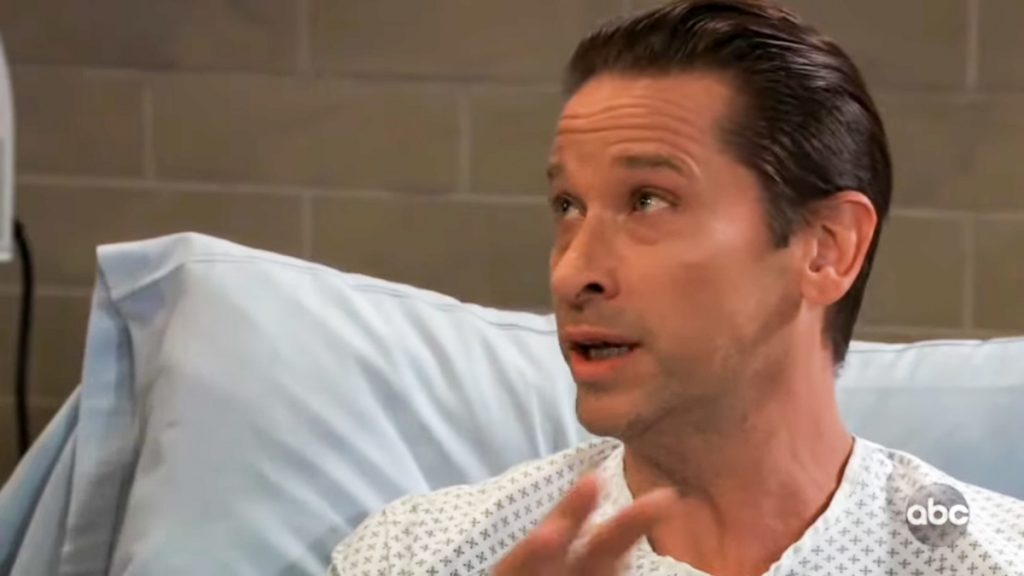 Welcome to your Friday December 20th General Hospital (GH) recap! We begin our day at General Hospital (GH) where Elizabeth Webber (Rebecca Herbst) tells Julian Jerome (Wiliam DeVry) that shes happy Lucas is breathing on his own. Nurse Amy walks you and tells them that Franco Baldwin (Roger Howarth) is ready to go home, Julian wonders if he knows yet about Drew and Kim?

At the Corinthos mansion, Willow Tait (Katelynn Macmullen) arrives to meet with Michael Corinthos (Chad Duell). He says he has some really fun things planned for the day and thought she would want to join.

In Anna Devane’s (Finola Hughes) home office, she is looking through mugshots including a picture of her son Peter August (Wes Ramsey). Hamilton Finn (Michael Easton) appears and says he put Violet to bed and is feeling exhausted as a new parent.

General Hospital Spoilers – Nelle Benson is still in the hospital after the attack.

In her hospital room at GH, Nelle Benson (Chloe Lanier) struggles with her handcuffs as her lawyer Martin Grey (Michael E Knight) arrives. He asks how she got stabbed and she says a serial killer did it, aka Ryan Chamberlain. Martin says he thinks she may be completely unreliable, but she needs to do exactly what he says.

Sitting by his bedside, Brad Cooper (Parry Shen) tells his unconscious husband Lucas that hes afraid to tell the truth. Brad goes over all the awful things he has done and then Julian comes in with an update. The doctor says his brain has taken on fluid and he is still in a deep coma. Brad walks away and collapses on the floor crying.

Willow says it was nice of Michael to skip work to play with Wiley and take a personal day. Willow asks about Michael’s history and he explains about his upbringing with Carly and Sonny. He tells her that his father AJ was killed by Sonny a few years ago.

Michael explains that he took Avery for a few months, but eventually gave her back when he forgave his father.

Anna Devane (Finola Hughes) tells Hamilton Finn (Michael Easton) that she is upset by all the possible crimes Jason mentioned that could involve her son Peter. She thinks he may have a connection to the assassin, as he was originally from Europe.

Maxie and Peter show up to spread some holiday cheer and brings some gifts to Violet. Maxie tells Anna separately that she is so happy to have found love again.

Jordan Ashford (Brianne Nicole Henry) shows up at GH and shows Franco a picture of his assassin. He says he doesn’t remember the face and why don’t they ask Drew Cain? Elizabeth and Franco go home and she explains that Drew is presumed dead.

Brad goes in to see Nelle and yells at her that everything is her fault. Franco is devastated that Drew is missing and maybe dead, he blames himself. Liz also tells him that he had sex with Kim while he thought he was Drew.

Jordan tells Julian that there is no further evidence about the rigged car accident. Anna realizes that Peter worked at the same place that the gunman did who tried to kill Franco. In the hallway, Nelle wheels up to Willow and tells her how beautiful Wiley is…….flash to preview