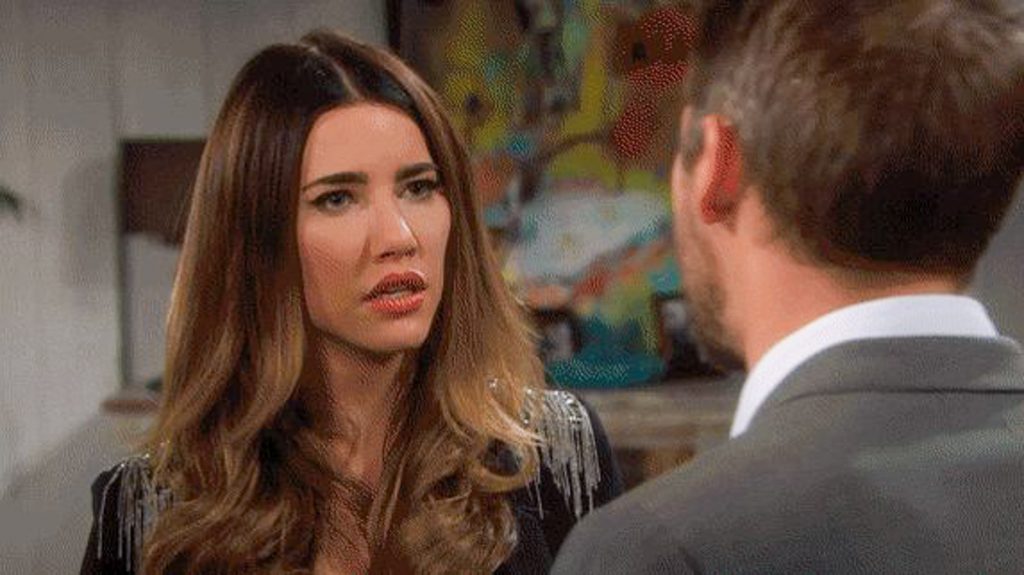 The Bold and the Beautiful spoilers tease that Liam Spencer (Scott Clifton) has a great idea that should allow him to confirm what Thomas Forrester’s (Matthew Atkinson) current motives are. Rather than just hope he’s learned from the past, or force Steffy Forrester (Jacqueline MacInnes Wood) into an awkward, no-win situation with her brother, Liam has convinced Zoe Buckingham (Kiara Barnes) to help.

Liam’s thoughts developed quickly after he and Steffy unexpectedly found Zoe in the apartment where Vincent Walker (Joe LoCicero) was believed to be living. They were greeted by Barnes’ desperate character, who’s been living at Vinny’s apartment for awhile, with that situation previously arranged through Thomas.

Atkinson’s character’s inability to deliver on his loose promise to Zoe, telling her that he’d eventually arrange her comeback at Forrester Creations, is driving the plot now. Needing money and coming to believe that Thomas is again obsessed with Hope Logan (Annika Noelle), Liam made his pitch to Zoe at exactly the right moment within this restarted storyline.

Bold And The Beautiful Spoilers – Beth Spencer Guilt Can Be Eased

Zoe was faced with seeing two of the three principal people whose lives were permanently damaged by the criminal scheme her father, Reese Buckingham (Wayne Brady), employed.

While she wasn’t directly involved, Zoe chose to remain silent when she learned that Beth Spencer (Madeline Valdez and River Davidson) never died, but instead was sold by her father to Taylor Hayes (Hunter Tylo) for a quarter-million dollars. Zoe was being targeted by muscle that Reese’s bookie was using to collect his debt. So Reese concocted the scheme, which he presented to Taylor as a private adoption.

Ridge Forrester (Thorsten Kaye) refuses to acknowledge that Thomas has a problem that can’t be solved. But Steffy is different.

Wood’s alter ego was dramatically impacted by what Thomas did. He knowingly manipulated the information he learned about Beth’s existence in order to orchestrate what appeared to be the start of Steam’s revival and his ill-fated marriage to Hope.

Liam wants Steffy to learn for herself what Thomas is doing. Clifton’s character knows that Steffy doesn’t want to investigate her brother herself. So, bringing Zoe into the picture is an encouraging step, as she’s motivated to help them and will also benefit by working at FC again.

Thomas has foolishly told various people, like Vinny, Zoe, and Sally Spectra (Courtney Hope) of his plans. His brash nature led him to believe that those individuals wouldn’t derail perceived progress. This time may be different.

Zoe was, for some soapy reason, hoping to establish a relationship with Thomas and also gain his help in reestablishing her career. Now she’s come to think that neither will happen, while also recognizing that the person who previously threatened her last summer remains as unbalanced, or even more so, than when she was last working as a model.

Atkinson’s character lacks empathy, as Brooke Logan Forrester (Katherine Kelly Lang) recently told Hope. So, Liam, Steffy, and Zoe can’t take Thomas lightly, as he’s liable to strike any of them if he learns that they’re standing in the way of his ultimate goal, which is to create a life with Hope.

CDL is a leading source for everything linked to The Bold and the Beautiful. Check back regularly for B&B spoilers and news!

General Hospital Spoilers: Will Nikolas Finally Give Up After Putting Charlotte In Danger Twice?