The Bold and the Beautiful (B&B) spoilers for Friday, December 13, tease that Thomas Forrester (Matthew Atkinson) will want some insurance. As B&B viewers know, Thomas recently found out that Ridge Forrester (Thorsten Kaye) and Brooke Forrester (Katherine Kelly Lang) had signed divorce papers. Thomas was absolutely thrilled about the development, as it’s what he’s wanted for months.

Well that, in addition to the problems that “Bridge” has had over Thomas, has finally led Brooke and Ridge to reach the end of the line for their marriage. And Thomas couldn’t be happier, but he’s going to want to make sure that Brooke and Ridge don’t get any ideas about reconciling, so he’ll seek some help. 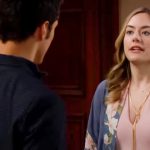 According to B&B spoilers, Thomas will corner Shauna and ask her to make sure that Ridge doesn’t reunite with Brooke. He’ll want Shauna to go after Ridge, so that Ridge moves on and doesn’t want to reconcile with Brooke. But how will Shauna react to Thomas’ proposition? Will she agree to do what Thomas wants?

Chances are, Shauna won’t be willing to change her strategy with Ridge just for Thomas’ benefit. Shauna really seems to love Ridge, and she probably won’t want to risk ruining things with him just so that Thomas can get what he wants. We’ll see what happens here, but it seems that Shauna cares too much about Ridge to seduce him just for Thomas.

Meanwhile, on Friday’s new episode of B&B, Liam Spencer (Scott Clifton) will make a request of Steffy Forrester (Jacqueline MacInnes Wood). As B&B viewers know, Liam just had a conversation with Thomas, during which he promised to find out what Thomas’ big plan for Hope Logan (Annika Noelle) was. Of course, Thomas denied having any such plan, but Liam doesn’t believe him.

According to B&B spoilers, Liam will approach Steffy and explain that he thinks Thomas is up to something. That will probably ring true with Steffy since she also suspects that Thomas is still obsessed with Hope and has ulterior motives in wanting to work with Hope on her fashion line at Forrester Creations. Liam will probably share that he spoke with Thomas, who assured him that he was finished with all of his schemes and manipulation.

However, Liam will explain to Steffy that he just can’t take Thomas’ word for it that he’s changed. Liam will say that he just knows that Thomas is up to something, and it looks like Steffy will agree. And according to ongoing B&B spoilers, Steffy will agree and she and Liam will partner to find out what’s going on with Thomas, which will ultimately lead them straight to Zoe Buckingham (Kiara Barnes).