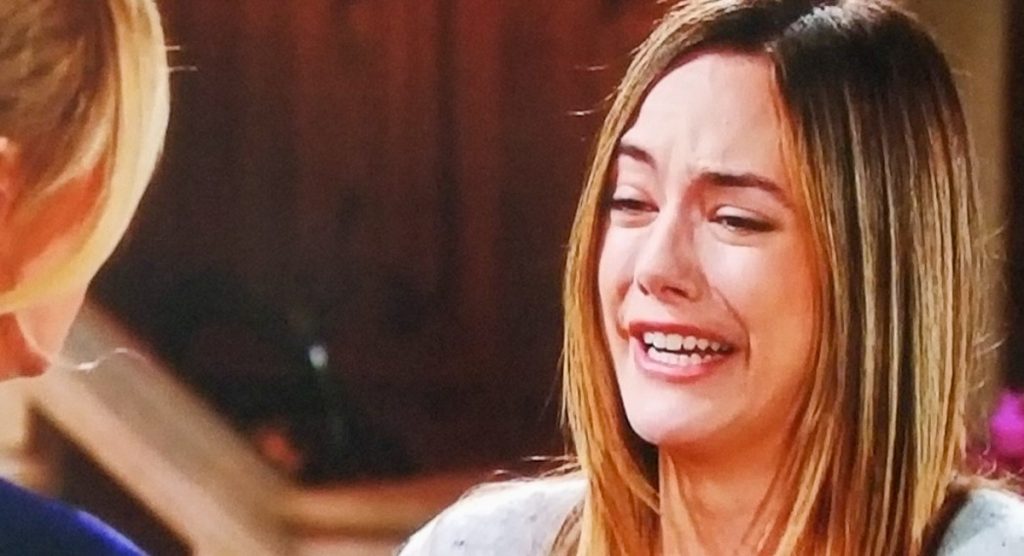 The Bold and the Beautiful spoilers reveal Hope Logan (Annika Noelle) confesses to Liam Spencer (Scott Clifton). However, she doesn’t do it right away. It is a process as she figures out if to tell him and how to explain murder.

B&B spoilers tease that even though Hope is convinced she killed Thomas Forrester (Matthew Atkinson), he is actually alive. However, until she learns that she didn’t commit murder, the young woman will be dealing with a lot of different emotions.

It is revealed that even though Brooke Logan Forrester (Katherine Kelly Lang) tries to protect Hope, the young woman knows she needs to confess. Not only is it damaging to keep secrets, but holding this all inside is messing with her head.

She is also struggling with her believing that she took a man’s life. It isn’t something she can justify to herself, even though it was an accident. Plus, how does she tell Douglas Forrester (Henry Joseph Samiri) that his father is dead?

As he gets older, there will also be the complication of explaining why she killed Douglas’ father. It could affect the parent/child relationship in a big way.

The Bold and the Beautiful spoilers tease that Hope is avoiding Liam. There is too much going on inside her head. Plus, how does she explain murder to the man she loves? She would also have to admit that Thomas wanted sex in exchange for signing the custody papers. Liam will be livid that she met with him alone after the shocking suggestion.

Eventually, Hope admits the truth to Liam. He won’t know how to process all the information. Plus, there is the additional twist of Thomas actually being alive. When he finally surfaces, it will be interesting to see how he handles nearly being killed by his obsession.

It seems Liam was right when he said that Hope was never going to get rid of Thomas now. The joint custody agreement binds them together as parents. It is possible that this was a hint of the trouble to come for “Lope.”

Be sure to tune in to catch up on everything happening on B&B right now. Come back here often for the latest in The Bold and the Beautiful spoilers, updates, news and rumors! news and updates!