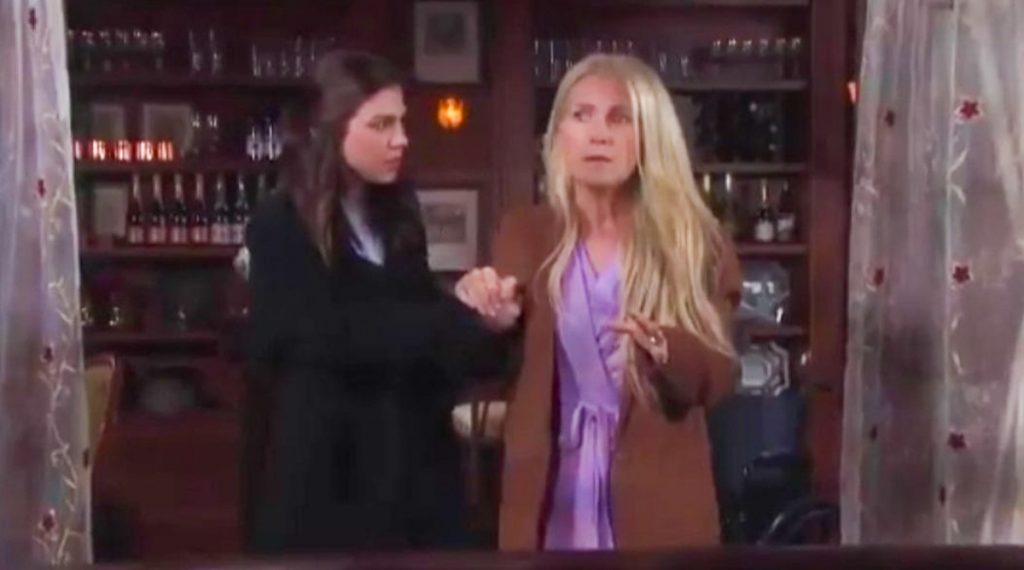 Days of Our Lives (DOOL) spoilers tease that Abigail DiMera (Kate Mansi) will soon get a new investigative assignment, and it will hit pretty close to home. As DOOL viewers will remember, her mom Jennifer Deveraux (Melissa Reeves) spent the time jump year in a coma after being pushed off the bistro balcony in town square. Jennifer has just awakened from her year-long slumber and she can’t remember what happened or who pushed her.

Well, as it turns out, Eve Donovan (Kassie DePaiva) ended up being falsely accused and convicted for pushing Jennifer. She’s now serving time in prison for the crime and has been for nearly a year. But as DOOL viewers recently saw, Eve told her lawyer Justin Kiriakis (Wally Kurth) that she is innocent and was framed for Jennifer’s attempted murder.

Well, it seems that Eve is not going to let up with her claims of being framed, and soon she’ll reach out an interesting source for help. According to DOOL spoilers, Eve will summon Abby to the prison for a chat. It looks like Eve will want to try to convince Abby that she is innocent of the crime. That might be a hard sell, though, since Abby will believe that this is the same person who pushed her mother over the balcony.

But it looks like Eve might be able to get through to Abby, who’s now an investigative reporter for the Salem Spectator. She’ll probably pique Abby’s interest when she argues that there’s an attempted murderer out there still, and that this person has gone unpunished for pushing Jennifer. It looks like Abby will remain skeptical, but that she’ll agree to take a closer look at the case.

Days of Our Lives Spoilers – Will Abigail Deveraux Be In Danger?

And, as DOOL viewers know, Princess Gina has assumed Hope’s identity for a year now. Princess Gina got away with her crime, and it appears that she and Rolf might have doctored the security footage at the bistro to make it seems like Eve was Jennifer’s assailant. At any rate, Princess Gina was never captured.

Well, now it seems that Abby will start to look into the matter. But what will she find? And will she end up being in danger at the hands of Princess Gina once she starts asking questions?