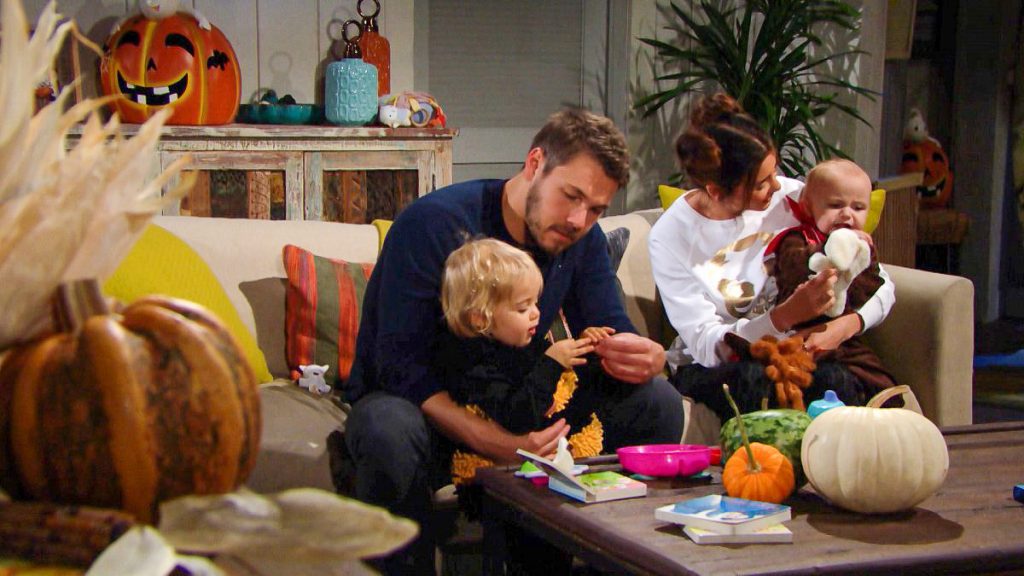 The Bold and the Beautiful spoilers for Friday, November 1, tease that Hope Logan (Annika Noelle) will face some tough questions. As B&B viewers know, she’s attending the Halloween party at the Forrester mansion, and she’s got two objectives – to be there for Douglas Forrester (Henry Joseph Samiri), and to try to get Thomas Forrester (Matthew Atkinson) to allow her to adopt Douglas. She’s already told Thomas that she forgives him and that she wants to focus on the future.

Bold & The Beautiful Spoilers – Hope Logan Has A Sneaky Plan

And so far, it seems that Thomas is falling for her manipulation. As B&B viewers know, Hope really has no intention of leaving Liam and getting back together with Thomas at any point down the line, but she needs him to believe that this could be possible for her plan to work. She wants to adopt Douglas and get joint custody of him, so that she can later petition the court for full custody and take him away from Thomas altogether.

So far, only Brooke Forrester (Katherine Kelly Lang) knows about Hope’s devious plan. And things could get dangerous if Thomas ever figures out what she’s up to. So that’s why things will get critical when Douglas and Thomas start asking her questions about their future together. B&B spoilers say that she’ll find herself in a bind as they start asking questions.

Of course, what will make things tough is that Douglas will be there, and he’ll be asking the questions. Hope won’t want to lie to him, but since Thomas will also be right there, she’ll feel that she has to lead them on a little about the possibility of the three of them being together in the future. Exactly what she ends up saying remains to be seen, but it looks like she’ll have to fib a bit to keep her ruse going for Thomas.

Next, on Friday’s new episode of B&B, Liam Spencer (Scott Clifton) and Steffy Forrester (Jacqueline MacInnes Wood) will revel in their evening together. As B&B viewers know, Liam brought Beth Spencer (River Davidson and Madeline Valdez) over to Steffy’s house for Halloween evening, since Hope was off at the Forrester mansion.

According to B&B spoilers, Liam and Steffy will have a great time with Beth and Kelly Spencer (Zoe Pennington). The girls will be decked out in costumes and playing together, and Liam and Steffy will positively beam. They’ll probably talk about how lucky they are to have such beautiful children in their lives, and they’ll be especially happy that the girls are getting to spend time together as sisters.

Steffy will probably be thrilled to have Beth in her home for the night, as she misses the little girl that she used to consider her own. Liam and Steffy will also talk about their own bond as well, marveling at what they share – not only do they share a beautiful daughter, but they now share a bond that can’t be broken. They’ll be extremely grateful for what they have and what they share.