General Hospital spoilers tease it will be another exciting cliffhanger Friday for GH fans!

At General Hospital, where he has gone to update Hayden Barnes (Rebecca Budig) on the search for the codicil to Mikkos Cassadine’s (John Colicos) will, Jasper “Jax” Jacks (Ingo Rademacher) makes a phone call to Laura Collins, (Genie Francis) who is still at the Metro Court Halloween party. Jax has remembered overhearing Dev Cerci (Ashton Arbab) saying that he picked up a painting from a garbage scow down at the docks. He realized this could have been Helena Cassadine’s (Constance Towers) portrait, and calls Laura to tell her that the portrait may have made its way to Ava Jerome’s (Maura West) art gallery.

Meanwhile, back at the Port Charles High School’s Halloween party on board the Haunted Star, Dustin Phillips (Mark Lawson) busts Cameron Webber (William Lipton) with the soda bottle filled with liquor from Sonny Corinthos’ (Maurice Benard) house. GH viewers will recall from Thursday’s episode that both he and Josslyn Jacks (Eden McCoy) got drunk on it and were confronted by Dustin and Lulu Spencer (Emme Rylan). Dustin grabs the bottle, and asks, “Looking for this, Mr. Webber?” He and Josslyn both can expect some fallout and consequences from their actions! 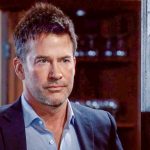 Back at the Metro Court Halloween party, Sasha Gilmore (Sofia Mattsson) tears into Michael Corinthos (Chad Duell)! Apparently she thinks he is trying to protect her just a little too much, since in Thursday’s episode he launched into Nina Reeves (Cynthia Watros) mid-tirade, asking her if she thinks Sasha came up with this fake daughter scheme all by herself! Sasha had convinced her that she acted alone, and lashes out at Michael, angrily telling him that she knows what he’s up to and she wants him to stop it!

At the Corinthos house, Sonny Corinthos talks to Dev Cerci. He is more than likely questioning him about Josslyn, his stepdaughter, getting drunk at the Halloween party. He buttonholes Dev for what he might know about it, asking him “You want to tell me something about tonight?” It’s doubtful this would be about the portrait of Helena Cassadine, even though Laura and Sonny are close friends; she would probably not have brought Sonny into that situation.

Brad Cooper (Parry Shen) is talking to his sister in law, Carly Corinthos (Laura Wright) apparently in another room at the Corinthos house. Carly reassures Brad that the ball’s in his court about something they have been discussing, and that he should play it wisely! He may have confided in her about his and Lucas Jones’ (Ryan Carnes) marriage problems, since Carly is Lucas’ adoptive older sister.

Ava has left the Metro Court Halloween party and changed out of her Cruella DiVille costume into some nice business wear to go to her art gallery to handle some business. General Hospital viewers saw her come face to face with a masked man in a black hooded cloak and point her gun at him, telling him to take off his mask! Ava knew that is who has been stalking her and told him so, but she is reeling from a shocking surprise as he complies, and reveals his face; she gasps as she cries out, in shock; NIKOLAS?! This is a new Nikolas Cassadine recast who looks much more like his father, Stavros Cassadine (Robert Kelker-Kelly) than his mother, Laura; but unfortunately, as of this writing we do not know his name; GH showrunners have not released it.