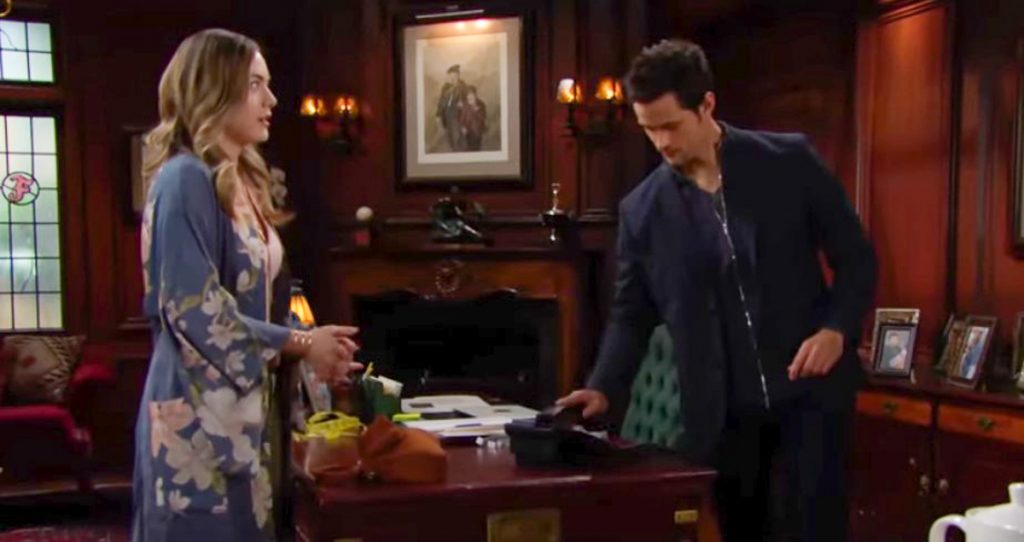 The Bold and the Beautiful spoilers for Friday, December 6, tease that Hope Logan (Annika Noelle) will have a decision to make. As B&B viewers know, she’s just been asked by both Thomas Forrester (Matthew Atkinson) and Douglas Forrester (Henry Joseph Samiri) to return to Forrester Creations and lead the design team for the Hope For The Future line.

This came after Thomas ushered in some models wearing samples of some of his new designs for Hope For The Future. Hope was clearly into the designs and liked what she saw. And as B&B viewers know, she couldn’t help but feel a bit tempted to return to the helm of Hope For The Future when Douglas sweetly asked her to return and work with his dad.

But what will Liam Spencer (Scott Clifton) think about the whole thing? One wonders whether Hope will talk with Liam about the big proposition that Thomas and Douglas sprung on her before she makes a decision. At any rate, Liam will probably feel that Thomas is trying to manipulate Hope again, and that Hope doesn’t seem to appreciate what he’s doing. It might cause some problems between Hope and Liam going forward, especially if Hope accepts the offer.

B&B Spoilers – Ridge Forrester Wants To Save His Marriage

Meanwhile, on Friday’s new episode of B&B, Ridge Forrester (Thorsten Kaye) will give Brooke Forrester (Katherine Kelly Lang) an opportunity to save their marriage. As B&B viewers know, Ridge recently told Brooke that their marriage was over. He simply couldn’t take it that Brooke had withheld information from him about Thomas.

Specifically, Brooke went for a full day believing that Hope had inadvertently killed Thomas, and she kept it from Ridge. That was the last straw for Ridge, and he walked out on Brooke and told her goodbye, despite her pleas to stay. Well, it seems that Ridge will offer Brooke one final opportunity to prove how much their marriage means to her.

According to B&B spoilers, Ridge will have divorce papers drawn up and he’ll personally take them to Brooke. When they talk, he’ll tell her that she can save their marriage if she’d just forgive Thomas for his past misdeeds. It looks like Ridge will say that he’ll completely abandon his divorce plans if she’ll just offer forgiveness to his son.

The Bold and the Beautiful Spoilers: Hope to Make a Choice Between Liam and Douglas – Will She Choose New Son Over Real Family? @celebratesoaps #BB #BoldandBeautifulhttps://t.co/awvXEYnomg

But is this something that Brooke will do at this point? She’s made it no secret that she doesn’t trust Thomas and doesn’t want him anywhere near her or anyone she loves. She has overwhelming feelings of animosity toward Thomas and has repeatedly referred to him as “sick” and thinks he needs to be institutionalized. Would she really offer him forgiveness now?

We’ll see what Brooke decides to do on Friday’s episode, but given her history and her current feelings about Thomas, it seems doubtful that she’ll agree to meet Ridge’s condition. Do you think we’ll see Ridge and Brooke sign the divorce papers?