Lulu Spencer (Emme Rylan) is upset as she shares the latest news with her best friend Maxie Jones (Kirsten Storms). She tells her Brook Lynn Ashton (Amanda Setton) is back in town, and of course that means trouble with a capital T! Lulu and Brook Lynn have had their problems over the years, to be sure! Brook Lynn will dog Lulu’s every move and she will be sure to try to break up her romance with Dustin Phillips (Mark Lawson)!

Meanwhile, back at the Quartermaine mansion, Olivia Quartermaine (Lisa LoCicero) snarks with a smile on her face at Brook Lynn, who looks visibly angered. Olivia tells Brook Lynn that she hasn’t even seen the half of it! Question is, the half of what? The trouble Olivia could make for Brook Lynn if she gets on her bad side? It’s a possibility! 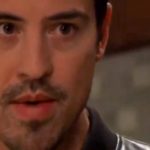 After experiencing an extremely nerve wracking false alarm about pregnancy, Willow Tait (Kateyln MacMullen) thinks it’s time to have a very important conversation with her very serious boyfriend, Detective Harrison Chase (Josh Swickard). She tells Chase she thinks it is time that they figure out how they feel about having kids!

At General Hospital, it is obvious that Peter August (Wes Ramsey) and Elizabeth Baldwin (Rebecca Herbst) are discussing Franco Baldwin’s (Roger Howarth) impending memory transfer reversal procedure, since Peter tells Elizabeth that if he had made different choices, she wouldn’t be in the position she’s in. Of course he is talking about when he helped Helena Cassadine (Constance Towers) kidnap Drew Cain (Billy Miller) out of Afghanistan for the original memory transfer procedure when Drew got Jason Morgan’s (Steve Burton) memories, minimizing his true role, which he hopes is never exposed!

Back at the Quartermaine’s, Franco stands in the yard near the door talking to Ned Quartermaine (Wally Kurth) as he plans to complete an important project. He tells Ned that it is one of the last things he can do as Drew for Drew. Is he talking about the memory transfer or possibly something else? Someone needs to go to San Diego and see what is in that locker Drew had there!

Jason Morgan, back from New York City where he took Danny Morgan (Porter Fasullo) and Scout Cain (Ella Ramacieri) for Thanksgiving, talks about some plans of his own to Sonny Corinthos (Maurice Benard). Jason tells Sonny that he is going to take action so things DO work out the way HE wants. Other General Hospital spoilers say that Jason surprises Ned, so maybe he shows up at the Quartermaine’s and he and Franco finish building that treehouse Oscar Nero Quartermaine (Garren Lake Stitt) wanted for the kids!

The Bold And The Beautiful Spoilers: Brooke Makes Final Call On ‘Bridge’ Marriage – What Will She Decide?