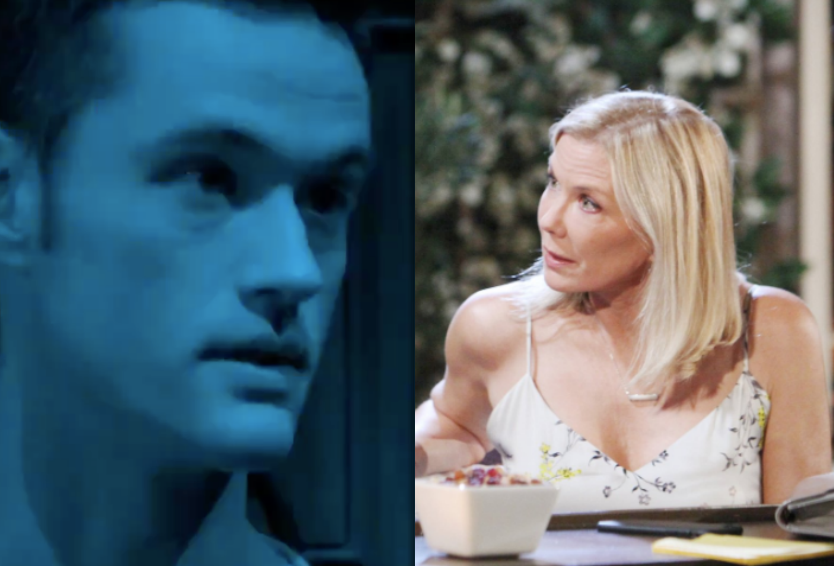 The Bold and the Beautiful spoilers tease that Brooke Forrester (Katherine Kelly Lang) will grow more suspicious of Thomas Forrester (Matthew Atkinson) in the days to come. Brooke hasn’t been happy with Thomas lately because of his recent behavior toward Hope Logan (Annika Noelle). Brooke feels like Thomas is obsessed with Hope, and she’s spot on.

As B&B viewers know, Thomas has been manipulating Hope for weeks. He deliberately came between her and Liam Spencer (Scott Clifton) and was instrumental in causing their spilt. Thomas is now determined to win Hope for himself and get her to be Douglas Forrester’s (Henry Joseph Samiri) new mom.

Well, Brooke doesn’t like the situation, and she thinks that Thomas should just give Hope some space rather than hovering around her and using Douglas to manipulate her. She’s tried to tell Ridge Forrester (Thorsten Kaye) that Thomas’ behavior is problematic, but he doesn’t see a problem. It’s frustrating for Brooke.

But Brooke’s frustration will soon turn to suspicion, as Brooke start to put some chilling details together. As B&B viewers know, Emma Barber (Nia Sioux) was recently killed in a car accident that Thomas heavily contributed to. Emma had just found out that Hope’s daughter was alive and living life as Phoebe Forrester (River Davidson and Madeline Valdez), and she was on the way to tell Hope the whole story.

Bold And The Beautiful Spoilers: Thomas Forrester Will Chase Emma Barber Off The Road

But then Thomas started chasing Emma, and Emma lost control of her car and went over an embankment, where she plunged to her death. Of course, Thomas will likely produce a cover story to conceal his part in the accident, but soon Brooke will learn some details that will cause her to seriously wonder whether Thomas knows more than he says.

B&B viewers will remember that shortly before the chase and accident, Pam Douglas (Alley Mills) walked in while Thomas and Emma were arguing about the Beth secret at Forrester Creations. Thomas was in the process of threatening Emma and preventing her from leaving to go spill the secret to Hope.

But Pam’s arrival allowed Emma the opportunity to escape, and she hopped in her car, followed shortly by Thomas. This is an important part of the story, and according to B&B spoilers, Pam will share these details with Brooke, who will be very interested in what Emma and Thomas could have been discussing in the minutes before Emma’s death.

B&B Spoilers: Brooke Forrester Realizes That Thomas Forrester Is On A Dangerous Path

It seems that Brooke will start to realize that Thomas might have had something to do with Emma’s demise, but of course she won’t know the whole story, and she’d never imagine that Emma knew such a horrible secret. But she’ll know that something is amiss.

Of course, Brooke probably won’t have much luck in sharing her suspicions with others. Those who are the closest to her are under the impression that Thomas is a kind and caring father who just wants the best for Hope, and they’d certainly never think that he contributed to someone’s death.

But at some point, the truth about what Thomas did will surely come to light. Do you think that Brooke will be the one to expose Thomas’ lies, deceit, and crimes?

The Young and the Restless Spoilers: A New Love For Jack? Will He Finally Find Happiness?

The Bold And The Beautiful Spoilers: Why Doesn’t Ridge Just Get Marriage To Shauna…