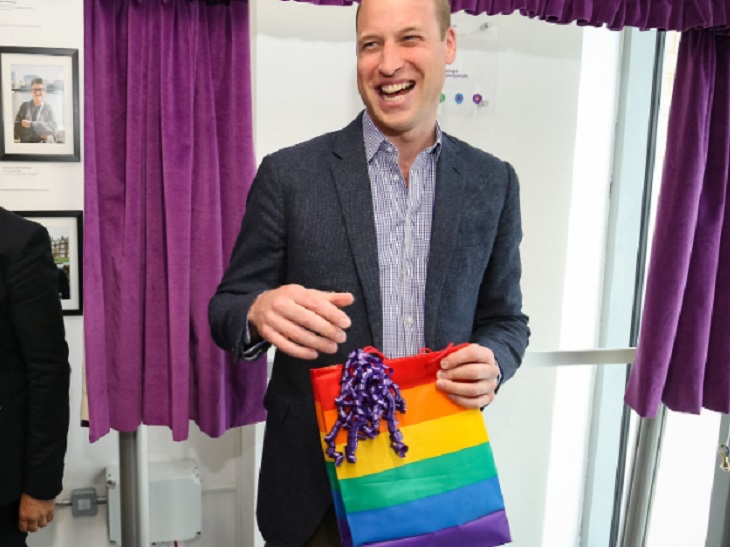 Prince William, a patron of the AKT charity, is the first Royal to pay an official visit to a charity supporting the LGBTQ+ youth community. William visited the new AKT service center in London on Wednesday, June 26. The AKT Charity mission statement is “Safe homes and a brighter future for LGBTQ+ young people.”

The Duke of Cambridge revealed that should Prince George, Princess Charlotte or Prince Louis were part of the LGBTQ+ community the children would have his full support.

Learning more about teen and young adult homelessness in the LGBTQ+ community, William also marked the 50th anniversary of the Stonewall Riots. The Duke of Cambridge also participated in a discussion about the Pride Parade to be held on July 6 in London.

It was June 28, 1969, when police raided the Stonewall Inn located in Greenwich Village neighborhood. Police in Manhattan, New York raided the Inn, one of only a few establishments that welcomed openly gay members as patrons.

To all the men and women who make up the Armed Forces community, from currently serving troops to service families, veterans and reservists, cadets and charities: thank you.#SaluteOurForces pic.twitter.com/fzOsofVB90

The raid caused violent demonstrations by the gay community and resonated throughout gay communities around the world.

‘Also known as the Stonewall Uprising or Stonewall Rebellion, it is considered the most important event leading up to gay liberation and acceptance. A half-century later the LGBTQ+ community still faces worldwide discrimination.

The Duchess of Cambridge, a patron of Place2Be a children’s mental health organization, has talked of the support available to the Cambridge children should they face a need for counseling.

Ahead of the annual #PrideinLondon parade, The Duke of Cambridge visited @aktcharity to learn about the issue of LGBTQ+ youth homelessness, and the positive change that akt are enacting through their unique prevention and early action approach. pic.twitter.com/seYAKw8ASq

In February 2016 Kate Middleton was a guest writer for the Daily Mail. The Duchess of Cambridge wrote in the blog that Prince George and Princess Charlotte, and now also Prince Louis, will always be encouraged to speak openly about their feelings.

Kate Middleton wrote, “‘Like most parents today, [Prince] William and I would not hesitate to seek help for our children if they needed it.”

The Duke and Duchess of Cambridge are patrons of several organizations that provide support to children, teens, young adults, and families. In 2015 Kate Middleton recorded a video for Place2Be speaking up about mental health and early intervention for children..

These are encouraging words from the Duke of Cambridge’s words regarding the support Prince George, Princess Charlotte and Prince Louis would receive if they were to come out in the LGBTQ+ community. The statement offers hope that people around the world will become more aware of discrimination, bullying, and homelessness against young people in the community.