Thomas Forrester (Matthew Atkinson) wasn’t willing to let nature take it’s course on ‘The Bold and the Beautiful’. So he purchased a chemical enhancer, slipped it into Liam Spencer’s (Scott Clifton) drink and silently congratulated himself on another part of this plan being executed.

Vincent Walker (Joe LoCicero) appeared to not know or care why his old friend Thomas wanted the bag of capsules. Cash was given to him at the front door of Brooke Logan Forrester’s (Katherine Kelly Lang) estate and he was off.

B&B fans were right to wonder if Thomas was a user, thereby explaining his erratic behavior, or he had another idea in mind? The latter proved true.

The scene setup at the cliff house was a bit soapy, but believable enough to also be digested by viewers. Waiting until his sister and son were out of the room and Liam and Hope Logan (Annika Noelle) were in the kitchen talking, Thomas emptied the contents of one of the capsules he bought from Vincent into Liam’s margarita.

Sure, Liam could have chosen to not pick up his drink, pour it down the drain, or only take a sip. No, within minutes after Thomas’ drug drop, Liam drank the bulk of the elixir. 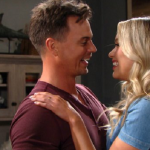 The resulting romantic rush Liam feels and his rekindling of relations with Steffy Forrester (Jacqueline MacInnes Wood) seems primed to push a ‘Steam’ reunion along by weeks, if not months. That time frame is taken from Liam and Hope’s conversation about the arrangements at the house since he moved back in and his seeming desire to take things slowly.

With Clifton’s character having just forcibly left the woman he loves, being Hope, within the last few weeks, Liam likely wouldn’t have become involved with Steffy until later this summer, or maybe into the fall. But Thomas has no desire to wait, as he sees Liam’s availability as a threat to Hope moving forward.

Not realizing that his drink has been spiked, Liam behaves oddly today on #YR. pic.twitter.com/Ee7wdio0Ek

Bold And The Beautiful Spoilers – Are Steffy And Liam Back Together For Good?

Atkinson’s pure villain character is center stage as B&B’s summer heats up. Now, it appears that Thomas is succeeding with the next part of his plan.

Fans of ‘The Bold and the Beautiful’ rightfully express their opinions on a regular basis. So, will Thomas’ drugging of Liam cause ‘Steam’ to fully reunite?

General Hospital Spoilers: A Mysterious Visitor Prepares For Her Return To Port Charles