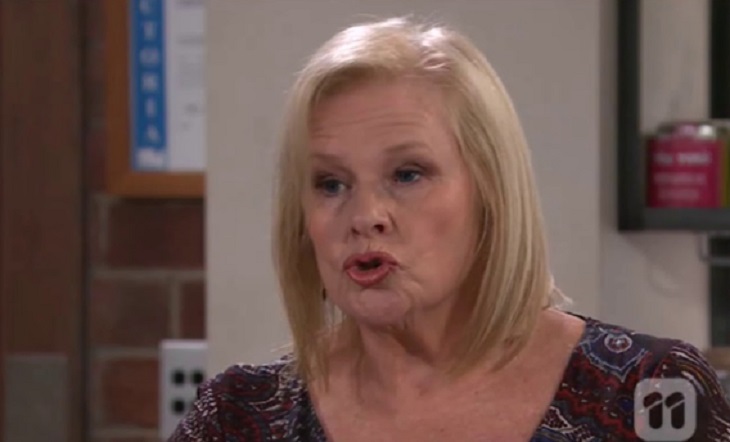 After hitting rock bottom, the welfare of Sheila Canning becomes of great concern after she disappears, leaving no clue as to where she’s gone.

Sheila has had a tricky few months, behaving in ways that many disapprove of. Though she is known for getting involved, she crossed the line this time when she teamed up with frenemy Paul Robinson in an effort to ruin her son Gary’s relationship with Amy Williams. As if this isn’t bad enough, Sheila then hid a bloodied crow bar, wrongly believing that Gary attacked Paul with it.

In scenes airing next week, Sheila attempts to build bridges with her son, but Gary is insistent that he will not forgive her for everything she has done. This affects Sheila greatly as she struggles to cope.

Bonnie Anderson takes us behind the scenes of the Erinsborough Music Festival and her new single, “Never Be The One” #Neighbours

You can stream or purchase Bonnie’s new single “Never Be The One” below: https://t.co/NuzZU1Q5dc pic.twitter.com/CdK7TX01W0

She tries to take her mind off of things by throwing herself into work, including collecting donations for The Sonya Rebecchi Foundation. However, she can’t forget everything that’s happening at home and ruins a sales pitch she is trying to give.

As villainous as ever, Paul is there to kick Sheila while she’s down, which question as to why there has been no repercussions for him, even though he had just as much involvement in ruining Gary and Amy’s relationship. Paul laughs it off, mocking Sheila and claiming it’s because he is better at life than her. Sheila is left devastated, deciding that the only thing she can do is run away.

When Shane Rebecchi later reveals that Sheila never turned up for work, Kyle and Amy become worried, and realise that she has gone missing. While Gary shrugs it off as attention seeking, he becomes worried when Detective Mark Brennan tells him that the last time she was seen she was highly distressed.

Will they find Sheila before anything bad happens?

Tune into Neighbours next week to find out!