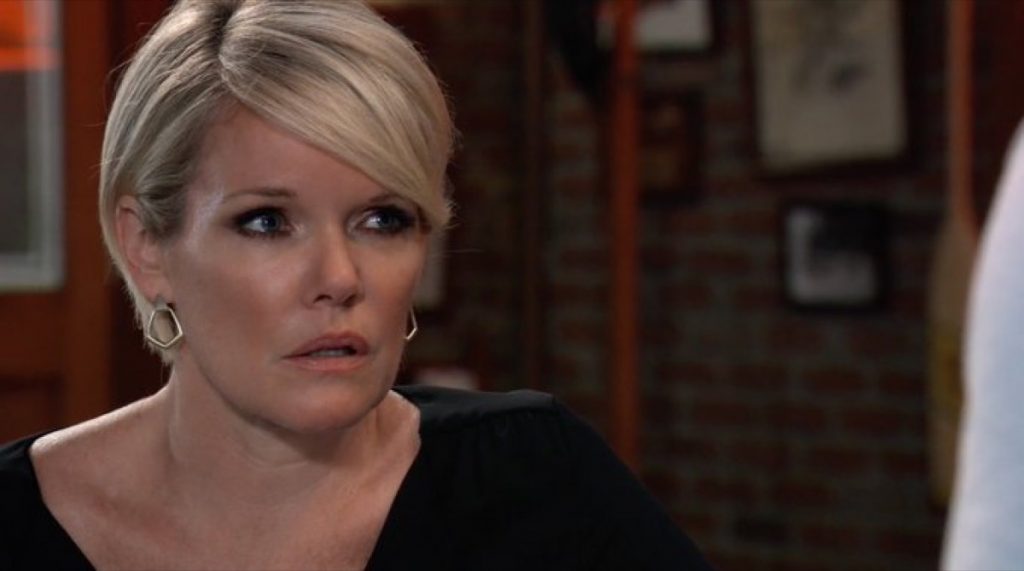 General Hospital spoilers tease that there are five important takeaways from this week’s General Hospital for the week of Monday, July 29th through Friday, August 2nd that fans should watch out for!

Ava Jerome (Maura West) will face demons of all kinds this week on General Hospital, from demons of negative reactions to the Crimson Magazine feature on her, “Midnight In The Garden Of Good And Ava” to her late daughter Kiki Jerome (Hayley Erin) not wanting to communicate with her through her new psychic, Chelsea Lam (Jen Ray).

As General Hospital viewers know, Ava fired her previous psychic, Sibley Gamble (Veronica Cartwright) after she failed to give Ava what she wanted to hear. She hired Chelsea and in Friday, July 26th’s episode she also told Ava that Kiki didn’t want to talk to her any more, and in previews for Monday, July 29th, Ava is outside with Chelsea and frustrated because she’s not trying to channel Kiki. On Tuesday, July 30th, Ava will receive even more disappointing news.

G&H Spoiler – Drew Cain May Learn More About His Past

Drew Cain (Billy Miller) may learn more about his past when he receives a mysterious package. In recent episodes of General Hospital, viewers learned, through flashbacks of Hank “Shiloh” Archer’s (Coby Ryan McLaughlin) memories, that although it was true that Drew rescued him from an IED, or improvised explosive device attack on a convoy where a Navy Seal named Tex (uncast character) was killed, Drew and Shiloh were anything but friends!

Shiloh and Tex had been stealing fuel and selling it to the enemy, which was an act of treason. Drew was going to turn Shiloh in for it since Tex was killed, and it could be that Drew got far enough in the case to have confiscated the money that Shiloh and Tex made off their dirty dealing, or knew something about what happened to it.

Other General Hospital spoilers for the week tease that Drew will suffer a setback, and later set up a meeting with Curtis Ashford (Donnell Turner) which could be related to what he receives in the mysterious package. Kim Nero (Tamara Braun) could also be featured in this storyline, with her having a suggestion in Tuesday’s episode and coming clean in Friday’s episode. General Hospital viewers will have to wait and see whether Kim is involved in this or not.

Lulu Falconeri (Emme Rylan) will continue to struggle to make a decision regarding the divorce papers she received from Dante Falconeri (Dominic Zamprogna); she will take a personal day off from work to consider the options. She will need to weigh fighting Dante on the divorce, hoping he will change his mind, or giving him what he wants, considering, of course whether fighting him could create false hope for both her and their children. Her mother Laura Collins (Genie Francis) will drop by and check on Lulu as she takes time to make her decision.

Jasper Jacks (Ingo Rademacher) and Valentin Cassadine (James Patrick Stuart) will continue to remain adversaries, both having deep investigations done on each other, with Jax bringing Hayden Barnes (Rebecca Budig) into the mix to do some snooping at Wyndemere. General Hospital viewers will recall that Jax originally asked Nina Reeves (Cynthia Watros) and Valentin out to dinner, with the intention of having his partner in possible crime Hayden Barnes (Rebecca Budig) going to Wyndemere to snoop while Jax has dinner out with Nina and Valentin.

Instead, Nina has turned the tables on Jax and invited him and Hayden to dinner at Wyndemere! Jax be focused on the task at hand while Hayden makes a fool of herself, possibly as a distraction. Also, Nina catches on to a plan of Valentin’s which may or may not relate to Valentin’s investigation of Jax and his trying to find out why Jax has a file on Cassandra Pierce (Jessica Tuck).

Also this week on General Hospital, the truth about Wiley Cooper-Jones (Eric and Theodore Olson) comes closer to being revealed; Michael Corinthos visits Nelle Benson (Chloe Lanier) in Pentonville Correctional Facility and Nelle tells Michael that she knows something about what happened to their son that he doesn’t; of course that would be that Wiley is really Jonah! Willow Tait (Katelyn MacMullen), the mother of the original Wiley talks to Julian Jerome (William DeVry) about helping him have more access to the baby, while Shiloh continues to press for custody, neither Willow nor Shiloh knowing that their baby had died and Nelle had swapped the dead baby for Jonah with Brad Cooper (Parry Shen).

Nelle learned about Shiloh and that Jonah may be in danger of being taken from Brad and his husband Lucas Jones (Ryan Carnes) in Friday, July 26th’s episode from her cellmate, Lorraine Miller (Inga Cadranel), formerly known as Harmony and thinking Wiley is her grandson. In previews, Nelle is shown in tears as she struggles to tell Michael something very important about their son; but will she tell him the truth now, or try to figure out some other way to protect Jonah, also known as Wiley, from Shiloh?

That’s all for this week’s five important takeaways from General Hospital. Stay tuned to GH and keep checking General Hospital spoilers frequently for all the latest news, updates and developments!