It’s been two years since Maurice Benard took a break on “General Hospital” to work on “Nightmare Cinema” and finally, the project he worked hard on premiered on June 21.

The horror film, “Nightmare Cinema,” screened in limited release at selected theaters. Benard played the role of Father Benedict, the head monsignor at a school of children who finds himself fighting real demons.

The segment “Mashit,” which Bernard is part of, was directed by Ryuhei Kitamura. He teased, “I was reading a lot of the reviews, and everyone seems to be talking about this scene at the end.” He also commended their director for an amazing job. “Director Ryuhei Kitamura’s music is just badass. It’s operatic. The way they shot it and produced it, it is out of this world!”

In a recent interview with the ABC Soaps in Depth, Benard said, “No joke: It is freaky. It is also campy and fun. The cinematography is really just out of this world, so it isn’t cheesy…. But it is over the top. I think you will dig it. Plus, you have never seen me play a priest.” 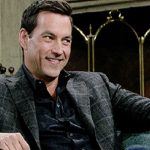 “I’ve played cops and Mafia guys. This guy is different. He’s a priest and a good guy, so it’s a different energy. I’m not playing a bad guy or Sonny, where I go in and say, ‘Yo, I’ll kick your ass, man!’” he added.

The anthology is divided into five different segments, which was made possible since the film focuses on five strangers who are at a haunted movie theatre that’s owned by the Projectionist, portrayed by Mickey Rourke. Each segment was spearheaded by different directors namely, Joe Dante, Alejandro Brugués, David Slade, and Mick Garris.

Here’s some great artwork from @MauriceBenard’s new film #NightmareCinema which is now playing in select theaters and on demand platforms! Check it out #GH fans! pic.twitter.com/oKugcHGsgC

Another part of the five-story collection is David Slade’s “This Way to Egress.” Slade, who’s known for his work in “Black Mirror:Bandersnatch” and “Hard Candy,” did a wonderful job. The story he helmed centers on Helen, played by Elizabeth Reaser, who experiences hallucinations but is convinced that is caused by her worsening mental illness. She tries to go to her doctor for help but ends up in a place that’s filled with monstrous beings.

‘The Young and the Restless’ Poll: New Evidence Clears Adam Of Accidentally Hitting Delia? Vote In Our Poll Now!