General Hospital Spoilers: Who Knocked Kevin Collins Out On The Pier? 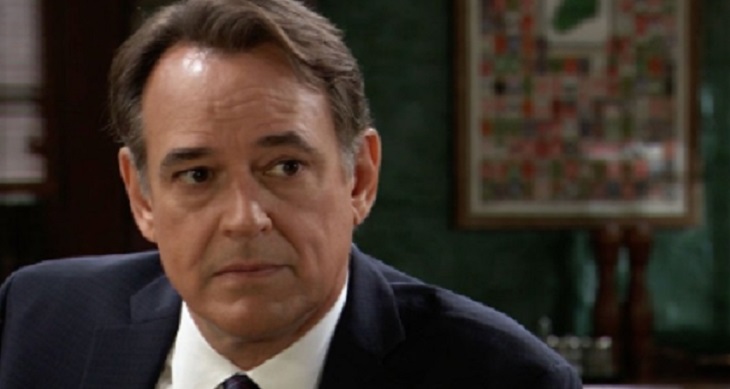 General Hospital’s Kevin Collins (Jon Lindstrom) isn’t on anyone’s nice list these days. However, someone on the pier decided to do what most of Port Charles feels like and knocked him out. Who was the person who took the first punch at Kevin?

Most People Would Assume Ryan Chamberlain Is Back On General Hospital

General Hospital’s Ryan Chamberlain (Jon Lindstrom) fell off a bridge near Niagra Falls, and a body never surfaced. Ryan has taken Kevin’s place before and would be the logical assumption. No body almost always means a soap opera return, and of course, we know that will happen with Ryan.

So is Ryan the one who is on the pier and hit Kevin? Probably not, Ryan would more than likely go after Ava since he’s obsessed with her instead of worrying about Kevin at this point.

"I'm getting everything I want." #GH55 pic.twitter.com/kSiXEOtyt6

General Hospital Spoilers – Mac Scorpio Is Mad Enough To Do It

General Hospital’s Mac Scorpio (John J. York) is furious with Kevin for putting them all in danger. Kevin knows that Ryan had an obsession with Felicia Jones Scorpio (Kristina Wagner). Mac hates that fact that his friend betrayed him and the rest of Port Charles putting everyone in danger and allowing Ryan to kill again.

No one could blame Mac if he punched Kevin, but he would have done it at the Floating Rib, he did not need to go to the pier to do it.

General Hospital’s Ava Jerome (Maura West) blames Kevin for Kiki Jerome’s (ex-Hayley Erin) death because if Kevin had turned Ryan over to the police, Ryan would not have been in a position to murder anyone.

Kevin’s desire to save his brother cost the lives of three innocent people. Ava was also at the Floating Rib and couldn’t have beat Kevin to the pier in her present condition. Ava might be justified in her need for revenge, but it is doubtful that she is the one who attacked Kevin.

General Hospital’s Griffin Monroe (Matt Cohen) overheard Laura Webber (Genie Frances) say that Kevin had hidden Ryan at Ferncliff for months. Griffin has lost all perspective since Kiki’s death, and no one knows where his mind has been Griffin’s hands are torn continuously up from going to the gym and boxing.

The person who hit Kevin seemed to land one blow that floored him. Griffin is also leaving the show so could he go rogue or merely leave town after attacking Kevin? Could Griffin believe Kevin is dead and go on the run? Griffin is the most likely candidate for hitting Kevin, and no one could blame him.