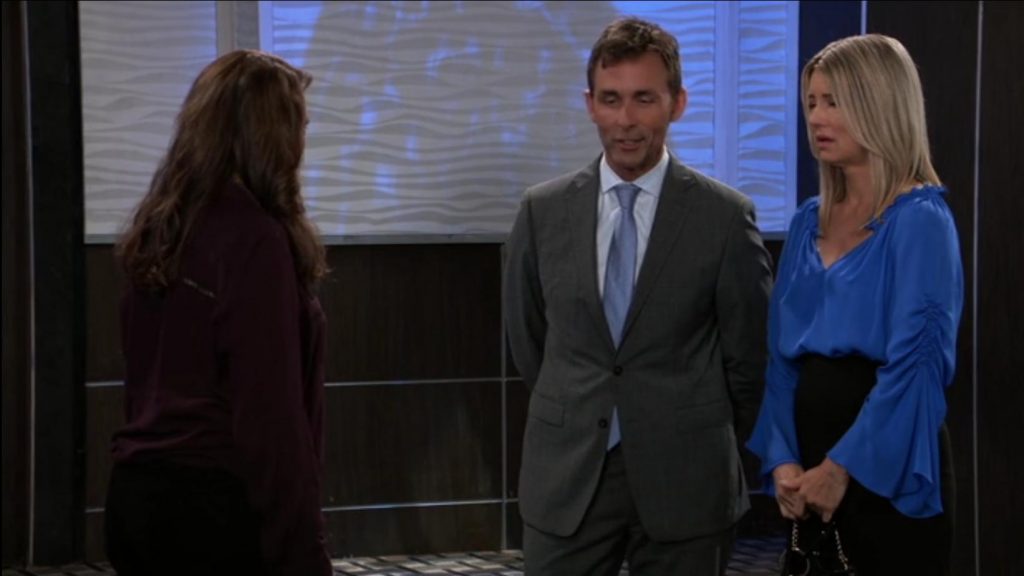 General Hospital (GH) spoilers tease that Valentin Cassadine (James Patrick Stuart) is suspicious; he has been spotting Curtis Ashford (Donnell Turner) sneaking around having meetings with Mayor Laura Collins (Genie Francis) a little too often lately; could Curtis secretly be working against him?

Valentin doesn’t trust Laura, and with good reason, knowing that she holds him responsible for the likely faked death of her son Nikolas Cassadine (most recently Nick Stabile) and resents his inheriting the Cassadine estate instead of her grandson Spencer Cassadine (Nicolas Bechtel)!

Jax and Hayden Barnes (Rebecca Budig) are looking for a codicil to Mikkos Cassadine’s (John Colicos) will, which would prove Valentin is not the true heir, and Laura is in the search with Curtis, even though he hasn’t been able to tell her exactly what they are looking for, because she is an expert on the Cassadines!

GH Spoilers – Valentin Cassadine May Not Know There Is A Codicil

Valentin may not know there even is a codicil, having found the version of Mikkos’ will that names him as the true heir in Greece, after Helena Cassadine’s (Constance Towers) death. Helena hated and feared Valentin, calling him the most evil and dangerous Cassadine, and likely didn’t know anything about the codicil or she would have made it known.

Jax and Hayden, on the other hand, know it exists and names the true heir, but they haven’t given any indication that they know who that true heir is; it would be assumed to be Nikolas if alive or Spencer, but it’s possible Mikkos could have even amended it for daughters or widows to inherit in the absence of male heirs, and if Helena knew of it there would be nothing left to inherit! Laura, if she knew this is what she and Curtis are looking for would assume Valentin not only knew of it but destroyed it!

Valentin also knows Curtis declined his offer to find Cassandra Pierce (Jessica Tuck) before she showed up in Port Charles anyway, which would have paid Curtis handsomely to give Valentin the intel and then walk away. Curtis could have paid every medical bill owed, paid TJ Ashford’s (Tajh Bellow) schooling, and bought him and his wife Commissioner Jordan Ashford (Briana Nicole Henry) a nice new house with no mortgage needed!

Of course, he’s suspicious that Curtis might be conspiring with Laura against him and likely on behalf of Spencer! Valentin has his own family to consider, and without the estate, he’d have nothing! Of course, once he and Nina Reeves (Cynthia Watros) get married they could certainly live off of her money but he wouldn’t want to do that!

Days Of Our Lives: Chad & Abby in Paris– Will Andre DiMera Murder Flashbacks Cause Abigail’s Mental Illness to Resurface?

Days Of Our Lives Spoilers: Kristen Informs Brady She’s Pregnant With His Child