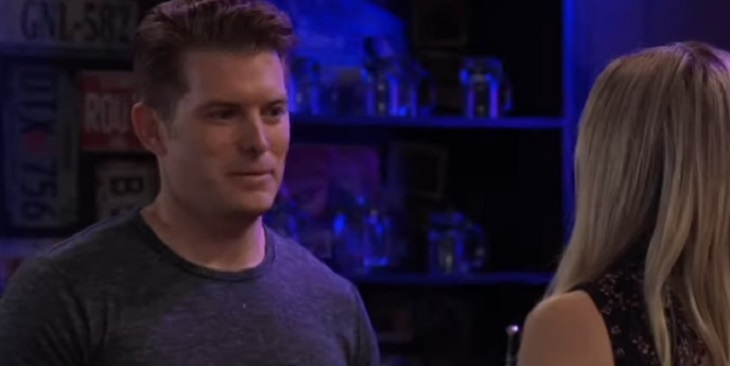 Lucy Coe approaches Michael Corinthos (Chad Duell) and Sasha Gilmore (Sofia Mattsson) as they sit together at a table having a meal; Lucy throws Sasha as she tells her that in another life she could be the Face of Deception!

Of course, Sasha wouldn’t know and even Michael might be too young to remember what Lucy was referring to with the phrase “Face of Deception” she’s referring to whoever held the title of top model for Deception Cosmetics, the cosmetic company she once owned. So Lucy is really telling Sasha she is pretty enough to be a model; or could there be a deeper meaning? Maybe Lucy thinks she resembles a former top model at Deception Cosmetics!

Curtis Ashford (Donnell Turner) meets with Valentin Cassadine (James Patrick Stuart) to discuss strategy for his investigation into Jasper Jacks (Ingo Rademacher). Curtis wants to know what Valentin and Cassandra might have in common, undoubtedly still trying to figure out why Jax has a file on her as well as on Valentin.

Valentin didn’t offer much information to Curtis the last time he asked about Cassandra, and had told him to ask Dr. Hamilton Finn (Michael Easton) about her, since he had brought her out of a coma after being lured to where Anna Devane (Finola Hughes) had been kept by kidnappers wanting Cassandra brought out of the coma.

Dustin Phillips (Mark Lawson), Lulu Falconeri’s (Emme Rylan) high school teacher friend who she met as someone who responded to her fake dating profile she’s using to try to draw out a burglar who uses the dating app to pick his victims, smiles and says hello to Lulu as he runs into her out and about, and even calls her “Lesley Lu”! Lulu’s not real happy but it’s not because she ran into Dustin, she’s upset over divorce papers from Dante Falconeri (Dominic Zamprogna)!

Josslyn Jacks (Eden McCoy) is upset as she stands with her group of friends, including her “new family member” Devin “Dev Cerci” (Ashton Arbab. As Trina Robinson (Sydney Mikayla) and Cameron Webber (William Lipton) look on, General Hospital viewers can see Joss is VERY upset with Dev; she says she’d just assumed that there was going to be a next time! General Hospital viewers have to be wondering what all that’s about!

Meanwhile, Josslyn’s mother, Carly Corinthos (Laura Wright) talks to her husband Sonny Corinthos (Maurice Benard) about his young friend and new relative Dev; she tells him she has figured out why Sonny is trying so hard to help Dev. It must be another reason than wanting to repay him for helping him find Dante in Ankara, Turkey several months ago and leading him to Raj Patel’s (Noshir Dalal) compound; maybe Carly thinks that Dev reminds Sonny in some way of Stone Cates (Michael Sutton)?

Elsewhere, Finn (Michael Easton) is with his former fiancée Hayden Barnes (Rebecca Budig). They are obviously talking about secrets, and in particular they must be talking about Hayden’s secrets, since he calls her out, telling her “You’ve kept your fair share of secrets from me!”