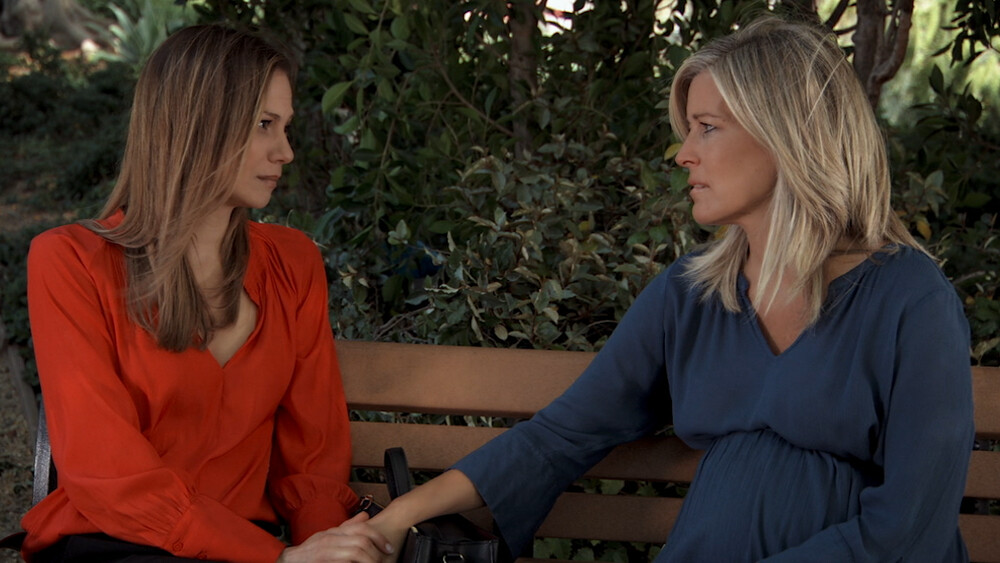 General Hospital spoilers for Tuesday, August 27th tease another exciting day for GH fans as some questions are answered and new ones need answers!

Kim Nero, (Tamara Braun) trying to run away from the increasing pull she feels towards Franco Baldwin (Roger Howarth) because of his pre-2012 Drew Cain (Steve Burton) memories and personality, tries to rush things with Julian Jerome (William DeVry). They were already planning to move to Manhattan together, and Olivia Quartermaine (Lisa LoCicero) made an offer on Charlie’s Pub, but Julian has to wait for the closing before making the big move with Kim. Now she wants him to make another big move and proposes marriage to him! Julian might think Kim is rushing things just a tad.

Elsewhere, a new question is asked as to why Bobbie Spencer (Jacklyn Zeman) throws presumably, a glass of water in Scott Baldwin’s (Kin Shriner) face! Maybe she thinks he needs a little cooling off, or could it be since she caught the bouquet at Carly and Sonny Corinthos’ (Laura Wright, Maurice Benard) vow renewal in Monday’s episode, perhaps she proposed to him and he turned her down? Didn’t he just ask her the same question a month or so ago and she turned her down? Viewers probably think these two are a little too past junior high age for these types of games!

Meanwhile, Elizabeth Baldwin (Rebecca Herbst) pours her heart out to fellow nurse Epiphany Johnson (Sonya Eddy). She tells Epiphany she just wants to get through to her husband! But will Franco ever be himself again? Time will tell, but for Liz and her boys, it can’t be soon enough! All she can do is hang on to what’s left of her man and not let go!

Liesl Obrecht (Kathleen Gati) must not have been around when Drew Cain (Billy Miller) had Jason Morgan’s (Steve Burton) memories implanted in his brain, because she slaps Franco hard across the face and tells him to snap out of it! Perhaps she assumed he’s been brainwashed and thinks she can slap the brainwashing out of his brain!

Elsewhere in the hospital, Nina Reeves (Cynthia Watros), who in Monday’s episode received Cassandra Pierce’s (Jessica Tuck) selfie taken as “Sandy Lance” with Sasha Gilmore (Sofia Mattsson) and Michael Corinthos (Chad Duell) while they were on the island, has rushed to her fiancé Valentin Cassadine (James Patrick Stuart) with the shocking intel. She calls Cassandra a choice word and tells Valentin Cassandra targeted Sasha, and Nina is one angry “mama”!

Viewers will also recall that near the end of Monday’s episode, Detective Harrison Chase (Josh Swickard) interrupted the end of Sonny and Carly Corinthos’ (Maurice Benard, Laura Wright) vow renewal with questions about his missing employee, Barry Ziegler (Ron Rogge). Sonny calls Dev Cerci (Ashton Arbab) over, still dressed up from the vow renewal, asks Sonny if something’s wrong. Sonny says slowly and suspiciously , I –don’t – know! Could there be more to Dev than meets the eye?