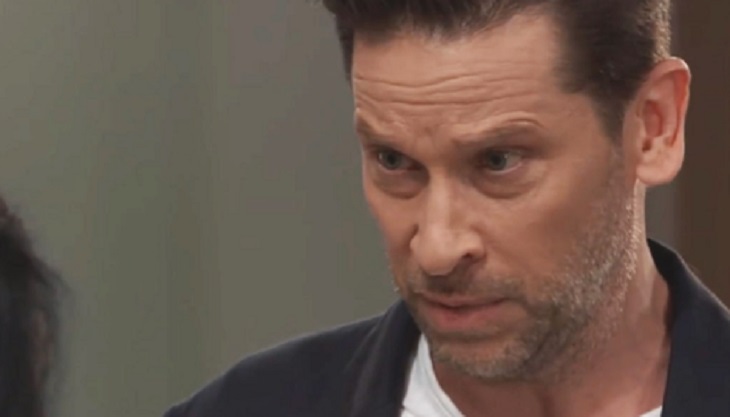 General Hospital spoilers tease that Elizabeth Webber Baldwin (Rebecca Herbst) will stay by her new husband Franco Baldwin’s (Roger Howarth) bedside, after having received a frightening phone call! Will he be himself when he wakes up this week on General Hospital?

General Hospital viewers will recall that there were two warnings to Franco from two different psychics in recent weeks, one from Sibley Gamble (Veronica Cartwright), who told him he wouldn’t be feeling himself soon, and the other from Chelsea Lambas (Jen Ray) who warned him not to take that drive!

The phrase “Don’t take that drive” could indicate either driving in a car, or it could also mean a flash drive one puts in a device or a computer! General Hospital viewers now know that the flash drive containing Drew Cain’s (Billy Miller) memories were stolen, by someone that Shiloh Archer (Coby Ryan McLaughlin) contacted, so obviously.However, there is a way that the two different ways of taking each of these warnings could all work together!

Elizabeth’s call will most likely involve finding out that Franco has been Dr. Cabot’s latest guinea pig. Jason is the only twin in the studies who did not receive cross-transferred memories from his twin; the first study, which Dr. Cabot himself more than likely performed, resulted in cross-transferred memories in Anna Devane (Finola Hughes) and her twin Alexandra Marick (Finola Hughes).

The second study, which was also performed by Cabot on Dr. Kevin Collins (Jon Lindstrom) and Ryan Chamberlain (Jon Lindstrom), who was in the DVX at that time, left evidence of Kevin’s receipt of Ryan’s memories, according to historical GH recaps from the mid- 1990s when he thought he was Ryan.

When Kevin was contacted about his brother and his terrible mental issues, it’s entirely possible that those came from the memory transfer also, and Jason didn’t receive Drew’s memories, and Drew was near death when Dr. Robin Scorpio-Drake (Kimberly McCullough) discovered him in the Swiss Clinic where she was kidnapped to resurrect Stavros Cassadine (Robert Kelker-Kelly) and thought he was Jason.

Other General Hospital spoilers tease that Shiloh will either kidnap Franco outright or he will be kidnapped to put Drew’s memories in while trying to help rescue Jason and Sam McCall (Kelly Monaco), possibly with Drew and maybe Curtis Ashford (Donnell Turner). General Hospital viewers already know that Sonny Corinthos (Maurice Benard) will be called for help as well.

Other General Hospital spoilers say that Franco will be horrified; it is a good bet that he will be horrified if he is indeed forced to “take that drive” in the form of Drew’s memories being implanted into his brain by who he will consider being a mad scientist!

General Hospital viewers can all agree that being kidnapped, and then possibly rendered unconscious to wake up to possibly be hooked up to hospital-type machines in a motel room would be horrifying!

General Hospital Spoilers – Franco Baldwin Will Be Asleep, But He Will Wake Up According To Other GH Spoilers

Other General Hospital spoilers later next week say that Liz will share what she knows with Franco, but also that Drew and Elizabeth will be stunned! So General Hospital viewers know he will wake up; but will he be Franco, or will he be Drew? Time will tell!