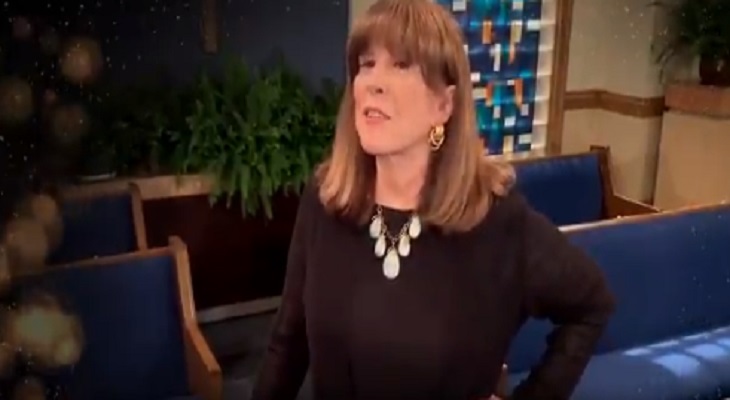 General Hospital spoilers for Tuesday, April 2, tease that a fun celebration is coming up. GH is celebrating its 56th anniversary with an exciting tribute to Dr. Gail Baldwin (Susan Brown) as well as the show’s history. Gail has asked that everyone gather for her bequest to the hospital, so that’s exactly what will happen. Even Dr. Lesley Webber (Denise Alexander) will show up for this special occasion.

Dr. Monica Quartermaine (Lesley Charleson) will take a moment to greet Lesley before they join the others. Bobbie Spencer (Jacklyn Zeman) will also catch up with Felicia Scorpio (Kristina Wagner) in Tuesday’s episode. They’ll do some reflecting and share a warm embrace, so plenty of sweet moments are on the way.

Julian Jerome (William deVry) will be summoned for this gathering, so he’ll be taken aback by the news. He’ll insist that Alexis Davis (Nancy Lee Grahn) is the one running the show. Julian just won’t get why he has to be there, but he’ll get his answer soon enough. Gail has some surprises in store, so Alexis will reveal all of them eventually.

GH fans can expect some heartfelt words for Scott Baldwin (Kin Shriner). He’ll appreciate the message Gail left behind for him, so he may get a bit choked up. Elizabeth Baldwin (Rebecca Herbst) will get some support from Epiphany Johnson (Sonya Eddy) on Tuesday as well.

Epiphany will insist that they’re a team, so she may mean the whole staff at General Hospital. They’ve always got each other’s backs.

It looks like Dr. Kevin Collins (Jon Lindstrom) may be part of this celebration as well. He may be wary of attending, but Lucy Coe (Lynn Herring) will provide reassurance. She’ll contend that Kevin is right where he’s meant to be, so the doc should remain grateful for Lucy’s kindness.

Laura Webber (Genie Francis) will watch Kevin and Lucy’s little moment nearby. Afterward, she’ll probably approach Kevin and get a sincere “thank you.” Laura posted Kevin’s bail, which he’ll likely figure out and express gratitude for. Let’s hope Kevin and Laura can start inching their way back to each other sooner or later.

Hey #GH fans,
Do you want Julian and Alexis to get back together? Click here for more info ⬇️⬇️⬇️https://t.co/vZS47jp4LS