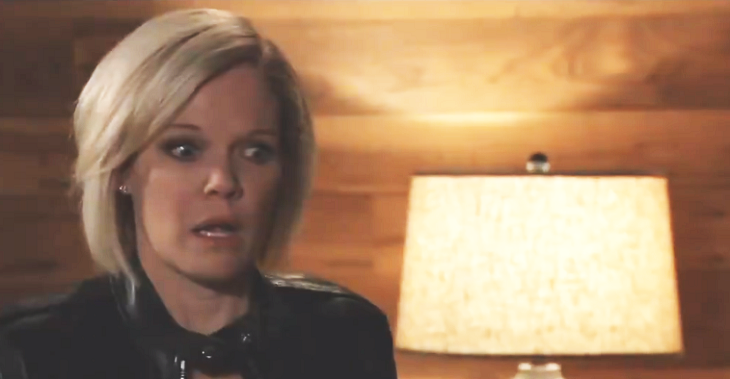 “General Hospital” spoilers for Thursday, May 23, tease that Ava Jerome (Maura West) will come face to face with Ryan Chamberlain (Jon Lindstrom). He’ll declare that she has no idea how much he’s missed her. Ryan will have a knife in his hand, so Ava will naturally look spooked. However, Ava is a fighter and will inevitably find a way out of this jam.

After all, this showdown is what Ava wanted. She’ll likely find a way to gain the upper hand and make Ryan pay the price. In the ballroom, Dr. Kevin Collins (Jon Lindstrom) will get the help he needs. Ryan strung him up above the stage in a straitjacket, which left Lucy Coe (Lynn Herring) reeling down below.

Kevin will be rescued with a little help from Lucy, Mac Scorpio (John J. York) and Felicia Scorpio (Kristina Wagner). “General Hospital” spoilers say they’ll urge Kevin to hang in there while Jordan Ashford (Briana Nicole Henry) deals with a crisis of her own.

At GH, Jordan will be in V-tach. Her doctors will get a grip on the situation, but Curtis Ashford (Donnell Turner) will fear he’s going to lose Jordan if a new kidney doesn’t surface soon.

Over with Margaux Dawson (Elizabeth Hendrickson), she’ll face some serious backlash. Margaux refused to leave the investigation open, so Laura Webber (Genie Francis) will blame the DA for the death of Ryan’s accomplice. “General Hospital” fans can expect Laura to rip into Margaux with everything she’s got!

Next, Willow Tait (Katelyn MacMullen) will talk to Michael Corinthos (Chad Duell) and Harrison Chase (Josh Swickard) about her child. She’ll note that Shiloh Archer (Coby Ryan McLaughlin) knows about the baby, but Chase will reassure her along with Michael. Nevertheless, it’s safe to say they’ll all fear Shiloh isn’t going to let this go.

Lucas Jones (Ryan Carnes) will be on edge since he just realized Willow and Shiloh must be Wiley Cooper-Jones’ birth parents. It seems he’ll eventually determine Brad’s been keeping him out of the loop on Willow’s connection. “General Hospital” spoilers state that some heated scenes are on the way, so GH fans won’t want to miss those.

Meanwhile, Shiloh will be ready to show Sam McCall (Kelly Monaco) a new dawn as they begin their sex session. Jason Morgan (Steve Burton) will listen in on the initiation with Sonny Corinthos (Maurice Benard), and he won’t like what he hears. He’ll tell Sonny that they have to move, so it won’t be long until Jason has another chance to play Superman.