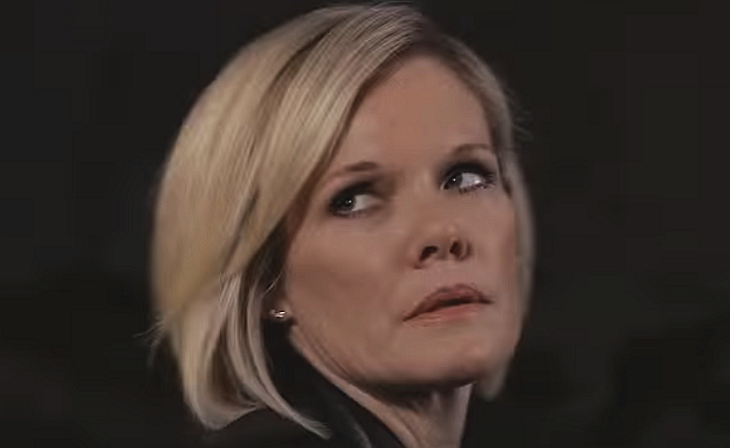 General Hospital spoilers tease that Ava Jerome (Maura West) will be struggling this week. Viewers will recall from Friday’s episode that Ryan Chamberlain (Jon Lindstrom) has more than likely left the house in Canada.

He is on the way to Port Charles to wreak havoc and mayhem. And he is definitely coming for Ava and is out to settle a score with Dr. Kevin Collins (Jon Lindstrom) for stealing his woman!

Curtis Ashford (Donnell Turner) and Laura Collins (Genie Francis) barely made it out of Ryan’s hideout before it exploded. Ryan planned the same end for them that he escaped over 25 years ago, also in Canada.

But it was at a fun-house full of mirrors where brother confronted brother and Ryan was long thought to have perished. Undoubtedly, unless Ryan trashed their cell phones, at least one of them will call ahead to warn Port Charles that Ryan’s on his way.

Longtime General Hospital viewers will recall the struggles that Felicia Scorpio, then Felicia Jones (Kristina Wagner) had with Ryan’s many returns from the dead. He also kidnapped Felicia, young Maxie Jones (then Robyn Richards) and baby Georgie Jones (Allana and Marina Norwood).

His final death was in the fun-house after Georgie was rescued. If General Hospital drags out this reappearance of Ryan, viewers can expect a similar scenario with Ryan and Ava, and possibly even Avery Corinthos (Ava and Grace Scarola).

After Felicia turned on him, Ryan’s love turned to hate, and it may for Ava as well, putting her in extreme danger. The most likely scenario is that Ryan again intercepts Kevin, knocks him out and ties him up somewhere and then takes on his persona again to fool Ava.

General Hospital viewers may question Ryan’s ability to successfully fool people as Kevin with only one hand. But there are very lifelike prosthetic hands and even bionic ones that he could be using.

Once Ryan has again fooled Ava into thinking he’s Kevin, then the hardest part for him is done. Ava may find herself tied up and struggling break free, as Curtis and Laura did in Toronto.