General Hospital (GH) spoilers for Thursday, June 13 tease another exciting day of drama for the viewers, with some unexpected surprises! Ava Jerome (Maura West) sits having a martini with her usual olives as she angrily spits at someone, possibly Jasper Jacks (Ingo Rademacher) “Take me as I am!”

In Wednesday’s episode, she refused to sign the deal for Crimson’s cover story because of Jax’s insults, while Nina Reeves (Michelle Stafford) looked at her new boss with frustration for ruining her deal!

In the Port Charles Police Department jail, Harmony Miller (Inga Cadranel) hopes Shiloh Archer (Coby Ryan McLaughlin) will help her, but all he’s interested in is finding his and Willow Tait’s (Katelyn MacMullen) baby. He tells her the most important thing is him finding his son!

Elsewhere, Michael Corinthos (Chad Duell) talks to Willow about Shiloh and the baby, telling her the first thing Shiloh would have to do is prove she had a baby; as General Hospital viewers know, Shiloh already has that information, thanks to a nurse at Mercy Hospital who told him everything! Of course, neither one of them know that the baby died; and the baby they think is Shiloh and Willow’s is really Michael’s son with Nelle Benson (Chloe Lanier), Jonah Corinthos (Eric and Theodore)! 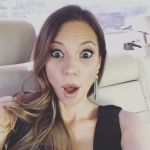 At the Metro Court, Carly Corinthos (Laura Wright) is livid as she complains about Ava to Jax, saying how that explicit word is still walking around while her son is dead! Actually, that fault belongs to Ava’s older sister, Olivia Jerome (Tonja Walker) but Carly can’t put hands around Olivia’s throat! Ava’s a much more convenient target!

At the infirmary in Pentonville Prison, Ryan Chamberlain (Jon Lindstrom) has recognized someone who apparently is tasked with clean-up chores in the infirmary; Nelle welcomes him to Pentonville! The two one-kidneyed sociopaths now have ill-gotten kidneys for others in common!