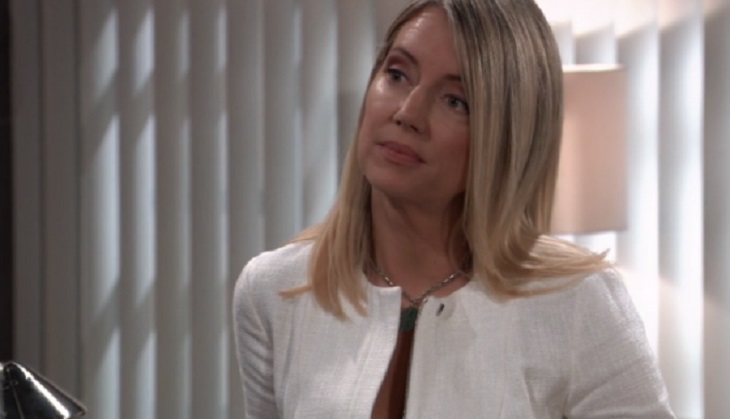 General Hospital spoilers tease that Jasper Jacks (Ingo Rademacher) will be warned about an alliance by someone in Tuesday, July 16th’s episode of General Hospital!

According to an article in Soap Opera Digest’s “late breaking news”, Nina Reeves (Cynthia Watros) will decide to do some digging of her own after finding out from her fiancé, Valentin Cassadine, (James Patrick Stuart) that Jax not only has a file on Valentin himself, but also on Cassandra Pierce (Jessica Tuck), whom Nina nearly killed by giving her a “dose of her own medicine” in a struggle with her, the “medicine” being a powerful, deadly drug that she was manufacturing and selling.

Nina is suspicious of Jax having an agenda, as he seems too good to be true, according to portrayer Cynthia Watros in the SOD article. She’s especially concerned with the Cassandra file, and goes to Jax trying to find out why he has it, under the guise of wanting to write a Crimson feature about an evil female villain and makes some suggestions to Jax; first she asks about Helena Cassadine (Constance Towers) and he turns her down flat. She then suggests Cassandra Pierce and he tells Nina he doesn’t know anything about Cassandra Pierce, catching him in a lie!

Nina then of course becomes even more suspicious of Jax and what kind of an agenda he might have that would be a reason for him to have files on both Cassandra and Valentin, and she keeps trying to get information about him but he keeps stonewalling her until she realizes she’s hit a dead end.

Then she comes up with another idea – why not hire her old friend Curtis Ashford (Donnell Turner) to dig up dirt on Jax and find out why he has those files? But there’s a catch – Valentin has been honest with Nina about hiring Curtis himself to dig up dirt on Jax, but she still is wary of Valentin’s history of being dishonest with her over certain things and she wants to make sure that she doesn’t have to get the information from Curtis through Valentin.

She wants Curtis to tell her what he finds out before he tells Valentin, and she has to work on him a little bit because he feels a little torn between Nina and Valentin both wanting intel on Jax, and Valentin hired him first. Curtis kind of feels like there’s a slight conflict of interest but she finally persuades him.

General Hospital viewers now know that Jax hired Hayden Barnes (Rebecca Budig) not to run Aurora Media’s financials as Chief Financial Officer only but to have her listening and looking in order to help him take Valentin down; more than likely Nina talks to Curtis about this in the Crimson Office, and it’s Hayden’s job to snoop and to eavesdrop on pertinent conversations. More than likely, it is Hayden who warns Jax of Nina and Curtis’ alliance and possibly Valentin’s part in it as well, depending on how much she might have heard!

General Hospital Spoilers: Sam Has A Surprise For Jason – A New Baby?