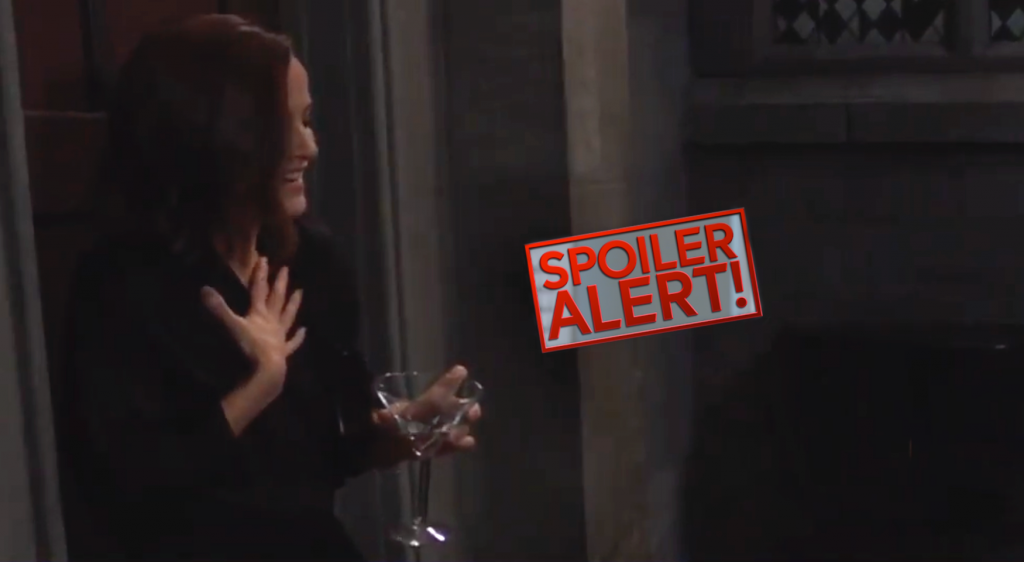 Lulu Falconeri (Emme Rylan) is distraught over the divorce papers she received from her husband Dante Falconeri (Dominic Zamprogna), and talks to her mother, Laura Webber Collins (Genie Francis) about her frustrations.

Likely coming off an experience with her boss Peter August (Wes Ramsey), who told her that Dante was an idiot for leaving her, which many General Hospital viewers and Lulu’s friends would tend to agree with, Lulu probably doesn’t feel like her friends are understanding what she is going through, although they mean well. A tearful Lulu tells Laura, “This is happening to ME!”

At the Metro Court, the storm raging outside has struck the electrical system and caused the elevator to stall, with Dr. Neil Byrne (Joe Flanigan) and Alexis Davis (Nancy Lee Grahn) in it! Just as Alexis had left a lunch date with Diane Miller (Carolyn Hennesy) who nagged her about her love life and why she didn’t date “Dr. Sexy” and here she is stuck in an elevator with him for who knows how long! Neil’s frustrated and says he has someplace he has to be!

At Wyndemere, Nina Reeves (Cynthia Watros) is acting just a little bit tipsy as she tells Jasper Jacks (Ingo Rademacher) “Somehow something doesn’t quite add up!” As General Hospital viewers know, on Wednesday, July 31st’s episode Valentin and Nina had started having a little argument over Valentin’s intention to put truth serum in Jax’s drink, which would have made him seem like he’d had a “wine buzz” as Valentin called it. Dr. Hamilton Finn (Michael Easton) had shown back up knocking on the door soaking wet, and as the door was answered by Valentin the drinks were served by Nina, and Jax grabbed the drinks to hand out to Nina, Hayden Barnes (Rebecca Budig) and himself! It looks like Nina got the one with the truth serum!

Hayden, in the meantime, had excused herself to go to the restroom, drink in hand (who does that?!) and found her way to a locked room which when Nikolas Cassadine (Tyler Christopher) lived there, was the office! Someone interrupts as she tries to open the locked door, and Hayden, taken by surprise, says “Oh my god! You scared me!” Hayden is smiling and a tad embarrassed, so it’s not likely to be Liesel Obrecht (Kathleen Gati) unless Hayden is a VERY good actress! It’s possible Charlotte Cassadine (Scarlett Fernandez) came out of her room, but Charlotte is a bigger tattle tale than Liesel, so Hayden had better come up with a cover story real quick!

In Puerto Rico, Cassandra Pierce (Jessica Tuck) calls someone with a mysterious message; she says to the person, don’t talk, just listen! She had just left a conversation with Sasha Gilmore (Sofia Mattsson) who had no idea who Cassandra is, using the name “Sandy Lance”. Michael Corinthos (Chad Duell) thought he recognized her but Cassandra didn’t look fazed by his possible recognition, although she reached for a gun in her bag! What could Cassandra be up to this time and who did she call? Is she calling about Michael, Sasha, or both; and why?

Meanwhile, Sasha is happy with Michael as she smiles and tells him that’s what’s different about him! Maybe he was just being nice and giving “Sandy Lance” a compliment!

Back at the Metro Court, Carly Corinthos (Laura Wright) calls someone and tells them there’s a big problem. She’s probably talking about the stuck elevator with Neil and Alexis in it, although it looks like the Metro Court restaurant is dark. Maybe the power has gone out in the whole hotel!