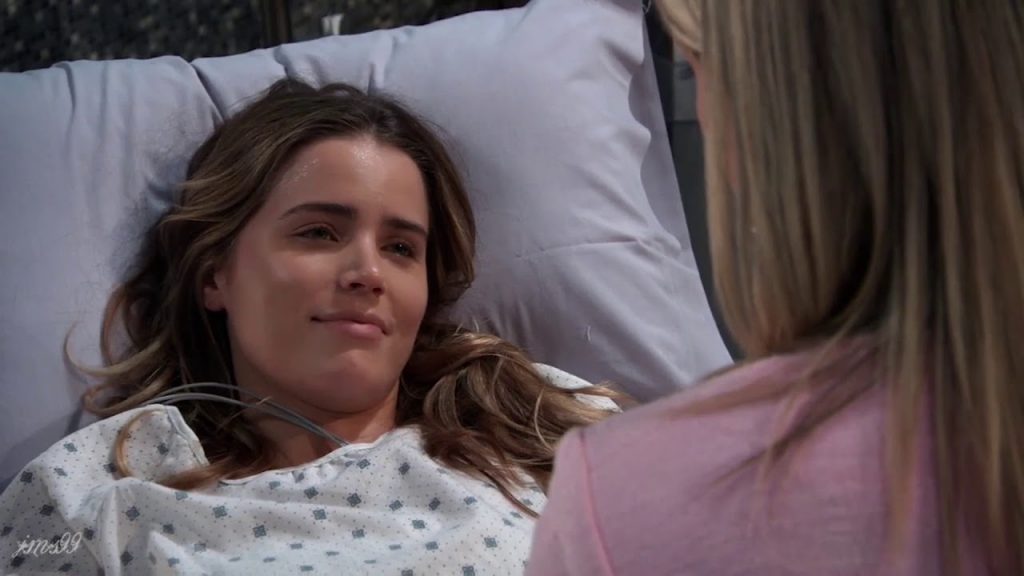 General Hospital spoilers tease that Nina Reeves, (Cynthia Watros) Valentin Cassadine, (James Patrick Stuart) and Liesl Obrecht (Kathleen Gati) will have something to celebrate soon on General Hospital; it looks like Sasha Gilmore (Sofia Mattsson) will turn the corner and recover from the bird flu!

As General Hospital viewers will recall, it took so long to arrive at an accurate diagnosis as far as which strain of rare influenza Sasha was suffering from, Dr. Hamilton Finn (Michael Easton) was concerned that it may be too late for the medical protocols that are used for this strain to work. It was also a possibility that since she contracted it because a grapefruit she was eating was inoculated with it by Cassandra Pierce (Jessica Tuck) that it could even be a mutated or genetically modified strain of avian influenza, otherwise known as bird flu! If that were the case, there may be no effective cure for it and Sasha could be doomed to die from it!

James Patrick Stuart, who of course plays Valentin, recently posted a photo of himself with Cynthia Watros (Nina) and wrote “The Wedding WILL Happen!” General Hospital viewers know that Nina won’t want to get married, at least not right away, if she is grieving for the young woman who she thinks is her daughter, but even if she’s not, the two are bonded closer than some real mother and daughter pairs! It is even possible that this close bond may override the truth of the matter if it were to come out that Sasha isn’t really Nina’s daughter!

Sasha has come close to spilling the beans recently, in particular to Michael Corinthos (Chad Duell) who she is rather obviously in love with, and he with her, but if the fear of death is no longer there then Sasha’s conscience may settle down a little bit and she will continue to keep the secret!

General Hospital Spoilers – Why Would Liesl Obrecht Celebrate Along With Nina Reeves And Valentin Cassadine?

Some viewers might wonder why Obrecht would celebrate along with Nina and Valentin; she knows that Sasha isn’t really her niece’s daughter, but there is still the possibility she could be related anyway, although the true relation has not yet been revealed. It’s hard to get past that strong resemblance between Sasha and Britt Westbourne, (Kelly Thibaud) after all!

But even if she’s not related, General Hospital seems to be redeeming Liesl Obrecht and she has a heart, even if she’s still sneaky and vengeful at times. She loves Nina and she loves her grandchild James West (the Marciano twins). The death of her only son, Nathan West (Ryan Paevey) seemed to make her appreciate family more. It’s even possible that Obrecht may have been able to give Finn a few tips or have been aware of when and how the virus was created, having been employed in a couple of labs that did experimental procedures in her past; so of course if something she told Finn helped turn the tide for Sasha, she’ll celebrate!

This wedding WILL happen. #valentina #generalhospital