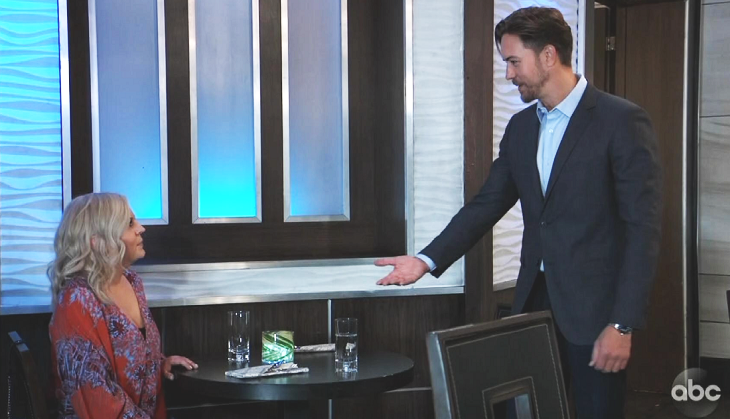 General Hospital spoilers tease that Peter August (Wes Ramsey) will surprise Maxie Jones (Kirsten Storms) with an over the top first date – he will want to whisk her away to Paris, France.

Maxie most certainly will be surprised! Will she accept Peter’s grand gesture? Maxie’s bestie Lulu Falconeri (Emme Rylan) will certainly want details about this when she finds out.

Maxie will indeed accept Peter’s grand gesture of a first date to Paris…possibly after a little coaxing and the sight of a crestfallen face on Peter. It seems she will feel like it’s too big (and too expensive) of a gesture on Peter’s part.

General Hospital Spoilers – Maxie Jones Will Give In

Rumor has it, she’ll give in when she realizes all the trouble Peter went to in order to impress her, and to set the trip up in the first place. There will be no doubt whatsoever in Maxie’s mind as to how Peter feels about her and what he wants, and that’s exactly what Peter meant to convey.

Peter doesn’t have a lot of experience in the romance department. In fact, he’s a little on the bashful side. But thanks to a chat with his mom, Anna Devane (Finola Hughes) his confidence has been bolstered and his heart has been encouraged.

Maxie will have to make sure Baby James (the Marciano twins) has a last minute babysitter. This will likely be either Lulu or his grandma Felicia Scorpio (Kristina Wagner). Peter probably wouldn’t mind if his nephew was along for the trip. But baby diapers and spit-up do have a way of inhibiting romance and killing moods!

General Hospital viewers who have been rooting for “Paxie” will enjoy their trip to Paris almost as much as they will, providing no unforeseen mishaps happen to the couple before or during their trip abroad.

This couple has been on a slow burn to romance for a long, long time. Maybe this trip will bring it all to the next level.