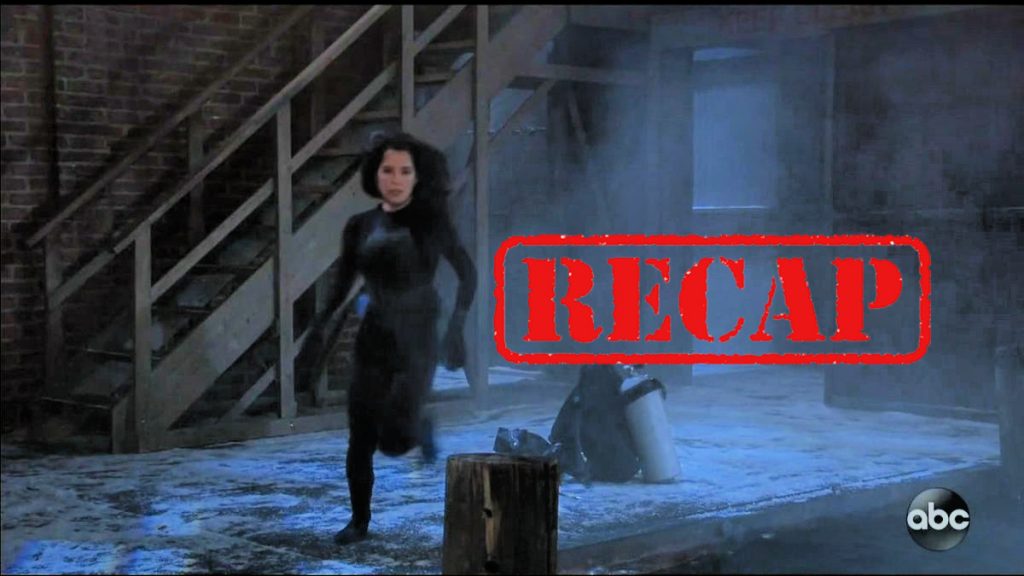 Jordan (Briana Nicole Henry) comes to the hospital to talk to Laura. Laura says Lulu is in surgery. Sonny was expecting an update, but it’s been an hour. Laura wants to know what evidence they have about Lulu’s case. Jordan insists in talking to Laura alone. Jordan has information that indicates that the same person who killed the other attacked Lulu. Laura tells Sonny she has been briefed and it was the serial killer. Laura gives Jordan approval to handle the press the way she sees fit.

Peter (Wes Ramsey) is the only person that the police haven’t spoken to that had contact with Lulu. Sonny joins in the questioning about Peter. Jordan tells Anna they need to eliminate Peter as a suspect. Peter and Maxie arrive at the hospital, and Jordan wants him to go to the police station. Jordan demands an account of his conversation with Lulu and his whereabouts for the last four hours. Peter tells Jordan he was at the book signing. Peter says his conversation with Lulu was about an angle she wanted to do on the serial killer story and he shut it down.

Once again Jordan has it wrong! Why would Peter stab Lulu?#GH pic.twitter.com/rJuKqWNJeI

General Hospital’s Ryan (Jon Lindstrom) is dreaming about Lulu, and he tells her not to go. Anna (Finola Hughes) and Finn Michael Easton) are outside Ryan’s door trying to figure out if he got infected with the same virus as she did. Ava (Maura West) says she feels sorry for Laura. Ryan thinks Lulu has died; Ava tells him she is in surgery. Ava says at least Lulu has a fighting chance, unlike Kiki (ex-Hayley Erin). Ryan doesn’t understand what is happening with the doctors.

Finn explains about Anna’s condition and blindness. Finn and Anna want to ask Ryan some questions and begin by asking if he has ever worked for the WSB or DVX. Ryan doesn’t remember the doctor that Anna mentions. Finn asks what Ryan was doing when he got that headache. Ryan says he wasn’t doing anything out of the ordinary. Ryan sends Finn and Anna out of the room. Ryan asks Ava to get some information on Lulu and bring him back a cup of tea.

Ryan doesn't like loose ends… but can he tie them up without the use of his eyes? A thrilling, new #GH starts RIGHT NOW on ABC! @thejonlindstrom pic.twitter.com/Sj8JfGfpd5

Ryan asks where his coat is and gets up to get it. Ryan drops Lulu’s license in the floor, and they go under the bed. Ava comes in as Ryan is on the floor he claims he was looking for the remote. Ryan tells Ava no one has cared about him the way she does. Ava kissing Ryan and Finn interrupts with answers about his blindness. Finn tells Ryan he will have to have surgery to fix his eyesight. Finn tells Ryan that he talked to Monica and Lulu is going to be fine.

Laura's determined to make headway on the search for the serial killer as Lulu fights for her life. #GH55#GH is dramatic and STARTS NOW on ABC! @GenieFrancis @MauriceBenard pic.twitter.com/PwOxa9tFzv

General Hospital Spoilers Sam Takes Matters In Her Own Hands

General Hospital’s Sam (Kelly Monaco) yells to Jason (Steve Burton), but he doesn’t answer. Jason wakes up and turns on the light on his phone to check his surroundings. The fire department arrives, and Sam tells them a man is trapped down there. Jason yells back to Sam, but she doesn’t answer. Jason starts looking for a way out and sees a grate. Sam explains to the fireman that she tried the light on her phone, but the hole is too deep, she can’t see Jason, but she saw him fall.

GH Spoilers Maxie Talk To Nathan About Moving On

General Hospital’s Maxie goes to Nathan’s (ex-Ryan Paevey) grave and talks to him. Maxie tells him it is their anniversary and talks about the Yankees. Maxie tells Nathan about James and how much they are alike. Maxie says she is learning a lot from James. Maxie tells Nathan she is getting closer to Peter. Maxie says Peter came into town under bad circumstances but underneath that he is a good man. Maxie wouldn’t mind getting to know Peter better. Maxie knows Nathan would want her to move on.

Maxie is at a crossroads with Peter, West Coast. Can visiting Nathan help sort out her feelings? #GH55
An emotional, new #GH STARTS NOW on ABC! @teenystweeting pic.twitter.com/ukaSb0aKC7

Maxie says the only reason she was able to move on was because of James. Maxie tells Nathan to give her a sign. Peter walks up and offers Maxie a handkerchief. Peter asks why Maxie is there with everything that is going on in the city. Maxie asks why he is there. Peter says he talks to his brother often. Maxie asks Peter is Nathan ever answers him, but he says no. Maxie says he answer her all the time. Maxie and Peter talk more, he thinks Nathan would want her to be happy.

Peter asks what Nathan is telling Maxie now and she says she can’t hear him. Nina arrives and tells Maxie she has been trying to get in touch with her. Maxie asks what is wrong, and she says it’s Lulu. Nina talks to Nathan after Maxie and Peter leave. Nina tells Nathan that his mom is back in town and dotes on James. Nina leaves change on Nathan’s tombstone and tells him how she and Maxie miss him. Nina tells him that Maxie is starting to move on but don’t hold it against her.