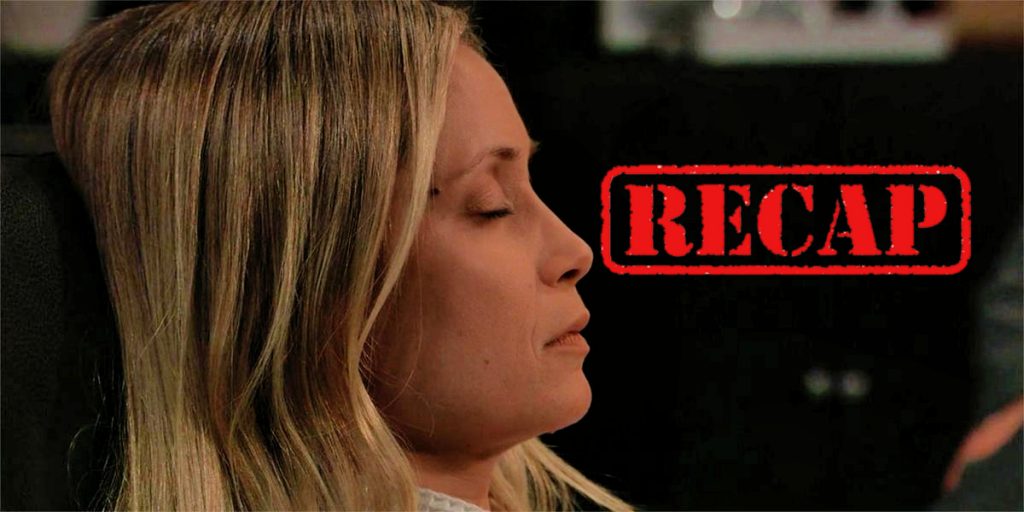 General Hospital (GH) recap for Tuesday, February 5, 2019, reveals Jason (Steve Burton) arrives at the Metrocourt to speak to Carly (Laura Wright). Jason tells Carly that Sam (Kelly Monaco) is breaking up with him.

GH Spoilers Jason Lets Carly In On The Plan

Carly goes off and threatens to call Sam. Jason explains it is a pretend breakup and tells her about Shiloh (Coby Ryan McLaughlin). Carly asks if Jason believes Kristina (Lexi Ainsworth) is in danger and he explains that they believe so. Carly thinks it’s great that Sam and Jason are looking out for Kristina. Jason tells Carly he and Sam plan to see each other in private. Liesl (Kathleen Gati) comes in and asks for complimentary food to celebrate her new job. Carly tells Liesl she doesn’t want her in the restaurant or to send patrons her way. Jason asks Carly how Liesl knows Nelle (Chloe Lanier).

General Hospital’s Valentin (James Patrick Stuart) and Nina (Michelle Stafford) talk about Liesl and their dinner. Nina is happy to be there with Valentin and Charlotte (Scarlett Fernandez), Sasha (Sophie Mattsson) is all that is missing. The doorbell rings, it’s Sasha. Nina asks how long Sasha is staying; she tells her a few days. Sasha asks if Nina is staying there because the killer still hasn’t been captured.

Carly has some questions about Sam's plan for Shiloh, West Coast. Can Jason answer them all to her satisfaction? #GH55
An all-new #GH starts RIGHT NOW on ABC! @lldubs @1SteveBurton pic.twitter.com/713npGTVAn

Nina tells Sasha she and Valentin are back together. Nina says she is going to march Sasha up to Liesl and ask how she is going to disappoint her. Nina questions how Liesl thinks anyone will give her a job. Sasha loves seeing Nina happy. Sasha tells Valentin he isn’t in charge, she is, and she doesn’t want Nina hurt by the truth. Nina comes back in, and Valentin excuses himself, Nina says he’s the best. Nina tells Sasha that Valentin asks her to marry him again.

Anything for Nina. Valentin pulls out all the stops with a surprise for his one and only. @TheRealStafford @japastu
An emotional, new #GH STARTS NOW on ABC! #GH55 pic.twitter.com/rd7GtuszOB

General Hospital’s Peter (Wes Ramsey) goes to Lulu’s (Emme Rylan) office and calls Jordan (Briana Nicole Henry). Peter demands to know what is going on with the investigation. Maxie (Kirsten Storms) overhears Peter on the phone; she forgot he could be so demanding when he wants something. Peter tells her he is concerned for Lulu, and he wants answers. Peter tells Maxie this is different; he wants the police to put this person away. Maxie talks to Peter about letting Liesl write a column for the Invader.

Maxie comes to Peter with an offer he would very much like to refuse. An all-new #GH starts RIGHT NOW on ABC! @teenystweeting @wesramsey #GH55 pic.twitter.com/qWelZinc26

Leisl gives Peter her ideas on a column and Maxie tries to convince Peter to read Liesl’s sample columns. Maxie says Liesl doesn’t fit Crimson, but she’s perfect for the Invader. Peter agrees to hire Maxie and Liesl is upset over it. Maxie tells Liesl she will not keep Peter out of James life and if Liesl can take they she can find a job elsewhere. Liesl goes out for food and says she will be back. Maxie tells Peter he will get used to Liesl and hugs him. Peter and Maxie almost kiss, and she gets a text from Nina. Peter calls Valentin and tells him he hired Liesl, and he can thank Maxie.

General Hospital’s Franco (Roger Howarth) and Liz (Rebecca Herbst) take Aiden (Jason David) ice skating, he wants to do this on his own. Liz wants to know how Franco is doing after being questioned. Franco tells Liz he wants to see “Kevin” (Jon Lindstrom) and they had a session. Franco says it went to Kiki’s (ex-Hayley Erin) grave as well. Liz tells him Kiki accepted him the way he was, and so does she.

Liz tells Franco he’s not a killer, he says the cops need to know that too. Aiden surprises them by skating backward. Brad (Parry Shen) and Lucas (Ryan Carnes) join Liz and Franco at the ice rink and asks them to watch Wiley. Aiden says he wants a baby brother or sister, and Franco asks Liz if she wants to have a baby with him. Franco thanks Lucas for helping with Aiden. Lucas tells Franco they need to learn to look past other people’s faults. Franco tries to assure Liz that everything is going to be ok.

General Hospital’s Laura (Genie Frances) goes to Lulu’s room to check on her, Ryan (Jon Lindstrom) arrives and is ready to hypnotize her. Jordan and Laura want to go with them to sit in on the session. Ryan tells Laura and Jordan that they cannot be in the room or he cannot treat Lulu. Ryan assures them that no other psychiatrist would let them in either. Lulu tells them this is her call and asks if she will remember the session. Ryan assures Lulu she will remember and she promises to tell Jordan everything.

Lulu tells Laura she is making her nervous and wants her to stay quiet. Ryan says he will help Lulu find all the answers she is looking for today. Ryan starts they hypnosis and tells Lulu to let him guide her to the truth. Lulu tells Ryan about the article and how Peter refused to publish it. Lulu remembers talking to Laura about a list of victims. Ryan asks Lulu what troubled her; Lulu was confused about the two names that weren’t there. Ryan tells Lulu that Laura never mentioned some victims.

Ryan tells Lulu she called him and they discussed the seven victims. Lulu says she was confused. Ryan asks who else Lulu had talked to that night. Lulu talked to Peter, and he refused to publish the article again. Lulu says someone came to the door and she went to it. Lulu wasn’t afraid of the attacker even though he had gloves on which seemed odd. Ryan calms her down and tells her to listen to his voice. Ryan asks Lulu if she remembers everything he said, she says yes. Lulu tells Ryan she sees the attacker and it’s Franco.

General Hospital’s Jordan and Laura talk about Lulu and Jordan’s belief that Franco is the killer. Laura tells her that she loves all of Liz’s kids and Franco lives with them. Laura hopes Lulu isn’t suffering too much trying to remember what happened.