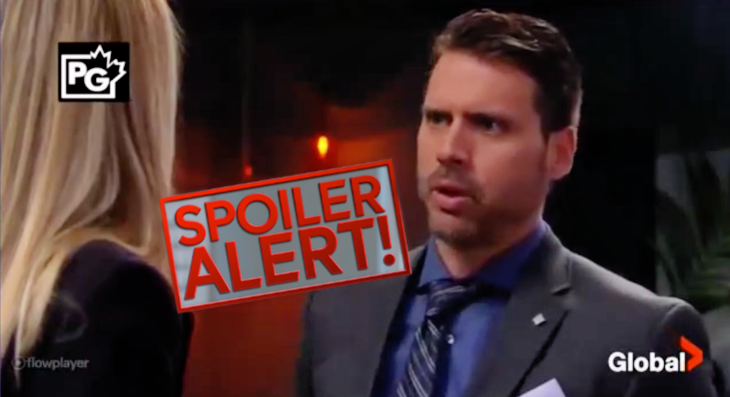 “Young and the Restless” spoilers say Fenmore “Fen” Baldwin (Zach Tinker) will blow off Ana Hamilton’s (Loren Stitt) texts. At the athletic club, Ana sends messages in hopes that Fen will show up early for his big event. Devon Hamilton (Bryton James) is thankful Ana had this idea and praises her hard work. Neil Winters (Kristoff St. John) arrives soon after and makes sure Devon’s managing his anxiety. Devon insists that having Ana around has been beneficial.

Over with Fen, he decides he’d rather get to the event at the last second. That way his pre-show jitters won’t be as bad. At the police station, Mariah Copeland (Camryn Grimes) pops in and explains Tessa Porter’s (Cait Fairbanks) job situation to Sharon Newman (Sharon Case). She convinces Sharon to back up the story she gave Abby Newman (Melissa Ordway) and Lola Rosales (Sasha Calle) if they get in touch.

Over with Kyle Abbott (Michael Mealor), he talks Lola into doing a double-date night with Mariah and Tessa. Naturally, Summer ends up derailing it. She pushes for everybody to sit down and have hot cocoa at Crimson Lights. Fen gets in on this awkward gathering as well. After Summer lets is slip that Kyle and Fen did a photoshoot, Lola’s stunned that Kyle neglected to mention his big ad campaign.

The Young And The Restless Spoilers: Devon Grows More Suspicious Of Ana, What Is She Really Hiding? #YR https://t.co/DOxvYWctBK

After Lola excuses herself for the evening, Kyle follows and gets her to admit what’s wrong. Lola thinks Summer is stalking Kyle at this point. They rehash Summer’s behavior and how Kyle responds to it. Lola feels like things would be different between them if they were having sex, which leads to a confession. Kyle admits that waiting has been difficult. He doesn’t understand what more he has to do to get Lola to trust him.

Lola takes off following their loud fight, so Fen gives Kyle a hard time about the lack of sex. He eventually realizes he’s running late for his gig, so he has to bail. Summer stays to comfort Kyle, but her idea of comfort is just telling Kyle that both people have needs in a relationship. She doesn’t feel like Kyle’s needs are being met, so she hints that Lola isn’t his best option.

Summer to Kyle: You have settled into a boring relationship with Lola.

That might be the most accurate thing that Summer has ever said.

After Devon leaves Fen a raging voicemail, Neil argues that Ana should take his place on stage. She performs and receives loads of applause as Fen appears. Back with Sharon, she’s on tip line duty when she stumbles across a startling email. The subject line reveals that it’s proof Victor Newman (Eric Braeden) is a murderer. The email contains an audio file of Nick Newman (Joshua Morrow) and Victor discussing the murder weapon.

Sharon gets confirmation that she’d be fired for deleting anything that’s already been logged. She heads over to Nick’s place on her break and brings him up to speed. Nick lets her know about Katie Abbott’s (Sienna Mercuri) adventure in the walls and the discovery of the surveillance equipment. They debate whether J.T. Hellstrom (Thad Luckinbill) could be alive before turning their attention to what’s next.

Back at the station, Sharon is feeling conflicted while Rey speaks about integrity on the job. #Shey #YR pic.twitter.com/VXproF6Pm3

Nick asks if Sharon can delete the tip email for him, but she feels like she has to hand it over. It’s a tough blow, but Nick gets why. Sharon tries to play it cool for a bit after she returns to work. She eventually gives the audio file to a grateful Rey. He believes they just might be able to score a conviction now.

“The Young and the Restless” spoilers say some great twists and turns are ahead. We’ll give you updates as other Y&R news and rumors emerge. Stay tuned to see what’s next in Genoa City.