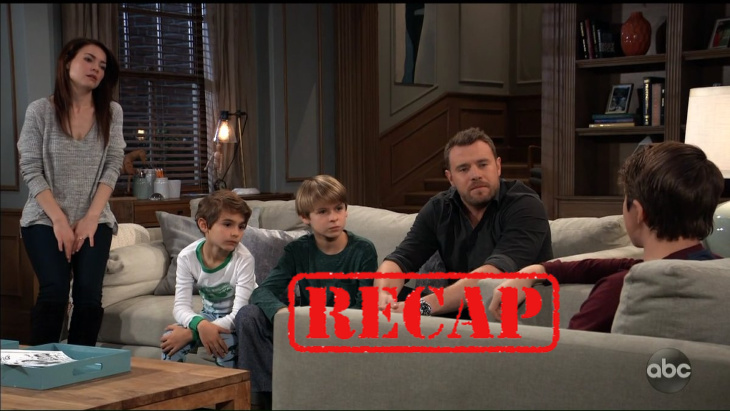 Jordan tells Drew if he has proof that Franco is innocent to give it to her otherwise they have nothing more to talk about right now. Drew tells Jordan that when Jim Harvey (ex-Greg Evigan) attacked Franco, Franco couldn’t kill him to save himself. Drew says Franco could not bear to take another person’s life. Drew says he can’t tell Jordan what happened to Franco in the past. Jordan tells Drew she read Kevin’s (Jon Lindstrom) file.

Drew asks Jordan if Franco couldn’t kill the man who molested him, how could he kill two strangers and someone he loved very much. Drew leaves and finds Curtis (Donnell Turner) outside the door. Curtis tells Drew he’s sorry about Franco; he knew he hoped Franco had turned things around. Drew says he didn’t know Franco had until just now. Curtis talks to Jordan and tells her Drew believes Franco is innocent. Curtis asks Jordan what she thinks about it. Curtis and Jordan talk about Franco’s past and decide that Franco has worked too hard to get the respect that Franco now has.

Jordan gets a visit from Drew that'll leave her questioning every aspect of her investigation into Franco. @Bri_Nic_Henry#GH is brand-new and STARTS NOW on ABC! #GH55 pic.twitter.com/7FQok0t1lv

Franco is an upstanding member of the medical community now. Both Jordan and Curtis decide that Franco is too obvious as a suspect. Curtis points out that even if Franco was intrigued by Ryan’s murders, he didn’t know about the license. Jordan suggests Franco could have wiped them down. Curtis tells Jordan that Franco would have hidden them somewhere, not leave them out. Jordan says if someone chose to frame Franco, the killer is still out there. Curtis asks if Jordan is going to drop the charges, she says he’s going to throw the book at him.

General Hospital’s Cameron (William Lipton) arrives home, and Liz (Rebecca Herbst) demands to know where Cameron was. Cameron has been in a fight over Franco. Liz and Cameron argue about Franco hurting Lulu (Emme Rylan) and the others. Liz tries to convince Cameron that Franco isn’t the person he once was anymore. Liz tells Cameron that whoever hurt him needs to apologize. Cameron tells Liz that she doesn’t want to face the truth. Cameron doesn’t care about people talking trash. Cameron wants to know how Aiden (Jason David) and Jake (Hudson West) are supposed to handle the things kids are saying about her and Franco. Liz calls the boys together, and they see what happened to Cameron.

Jake and Aiden question Liz about Franco and the murders. Aiden asks if Laura is lying saying Franco hurt Lulu. Drew arrives to check on Liz and the kids. The boys tell Drew what Laura said and asks who is right, Laura (Genie Frances) or Liz. Drew sits down with the boys and tells them that people make mistakes. Drew tells them that yes Franco has killed before, but he was sick then and didn’t do this. Drew tells the boys if he wasn’t sure Franco was a good guy, he wouldn’t let him live with them. Drew tells the boys he went to Jordan and spoke up for Franco. Drew goes upstairs with Jake and Aiden.

Liz tells Cameron to put some ice on his face. Cameron thanks Drew for coming over to see the boys. Drew tries to talk to Cameron about Franco. Liz tells Drew that Cameron was defending her honor and he doesn’t have to do that. Cameron tells Liz he doesn’t care what people say about Franco, but he has to protect her. Liz thanks Drew for coming over. Drew tells Liz he has to go but if she needs anything to let him know. Liz looks at Franco’s drawing and tells Liz there is something he can do.

General Hospital’s Maxie (Kirsten Storms) and Peter (Wes Ramsey) come up to Nina’s (Michelle Stafford) table at the Metrocourt. Nina tells Maxie that she and Valentin (James Patrick Stuart) are getting married again. Maxie congratulates Nina and Valentin; Peter does as well. Nina says Sasha (Sophie Mattsson) was partly responsible for her decision. Peter says it’s time Valentin put his past transgressions behind him. Valentin can’t make up for things but can try not to make any more mistakes.

Maxie knows Valentin is hiding something from Nina. Can she and Peter get to the bottom of it before they get married again?
An all-new #GH starts RIGHT NOW on ABC! @teenystweeting #GH55 pic.twitter.com/dZExucy1iK

Maxie and Valentin excuse themselves, Nina says it’s hard to get used to them together. Sasha says she never intended to convince Nina to marry Valentin and she strongly suggests Nina doesn’t. Nina tells Sasha that Valentin makes her happy and she will let him. Liesl (Kathleen Gati) joins Sasha and Nina. Leisl wants to know all about Sasha. Liesl stays to have champagne with Nina, Sasha, and Valentin. Liesl wants to get to know Sasha better. Valentin doesn’t want Liesl there. Liesl tells Nina about her job at The Invader. Valentin says they aren’t celebrating Liesl’s job. Liesl asks what they are celebrating. Valentin tells Liesl that Nina has agreed to marry him again.

General Hospital’s Spencer (Nicholas Bechtel) arrives at Sonny’s (Maurice Benard). Sonny is always happy to see Spencer but wants his honesty. Sonny wants to know why Spencer came to see him first. Spencer makes up an excuse, but Sonny wants answers. Sonny tells Spencer that he hasn’t heard anything about Valentin revealing his secret.

Spencer wants to spend the night at Sonny; Sonny demands he calls Laura and tells her the truth about the election tampering. Spencer thinks that Laura being mayor is the brightest thing in her life right now. Sonny tells Spencer that Laura would not be happy that Valentin has something over him. Sonny tells Spencer it is better not to have things hanging over your head.

General Hospital’s Franco is laying in the jail cell; Laura comes to see Franco. Franco tells Laura he didn’t attack Lulu, Laura doesn’t believe him. Franco tells Laura he didn’t kill those people. Franco suggests Laura talk to Liz. Laura doesn’t agree with Liz; she thinks she is making a mistake. Franco asks Laura why he would kill anyone now that he has everything he wants.

Franco says it is his place to take care of his family and he wouldn’t jeopardize that. Laura says Franco strapped a bomb to Lulu. Franco tells Laura he did that and Lulu is seeing him instead of the attacker. Laura accuses Franco of lying to Kevin in session. Franco says he told Kevin the truth. Laura tells him she read his file and he is a monster. Franco listens as Laura tells him what was in his file. Franco tells Laura he has no idea how that sick stuff got into his file because he didn’t say it.

General Hospital Spoilers: Will Valerie Be One Of Ryan’s Victims – Brytni Sarpy Exits?

General Hospital Maxie And Peter Know About The Blackmail

General Hospital’s Maxie and Peter get a table of their own. Maxie watches Nina’s table through a mirror. Maxie is shocked that Liesl injects herself into the celebration. Maxie tells Peter that any fight between Liesl and Valentin will hurt Nina. Peter tells Maxie that Valentin asked him to drop the charges against Liesl and to give her a job. Maxie and Peter figure out that Liesl is holding something about Sasha over Valentin’s head.

Bold and the Beautiful Spoilers & Recap Tuesday, February 12: Zoe Tells Xander There is Something Shady About The Adoption