General Hospital Spoilers: Will Valerie Be One Of Ryan’s Victims – Brytni Sarpy Exits? 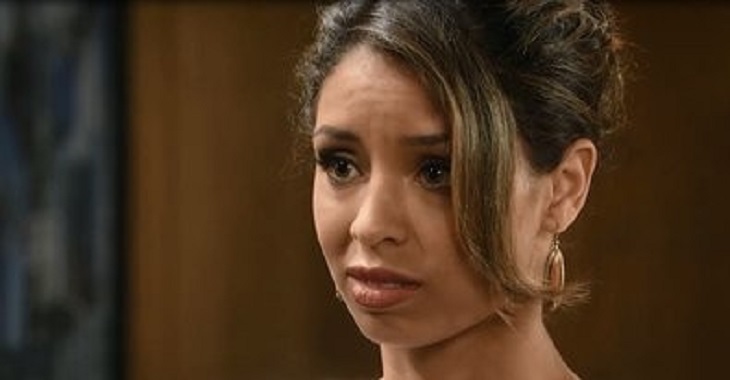 General Hospital spoilers tease that Valerie Spencer (Brytni Sarpy) may be making a hasty exit from Port Charles and the General Hospital canvas, since the actress just signed a contract with the Young and The Restless to play Elena Dawson.

News reports say she starts taping next week, so any Valerie scenes over at GH will have already been taped. We know she will be attending a Valentine’s Day party, even though Ryan Chamberlain (Jon Lindstrom) seems to have successfully framed Franco Baldwin (Roger Howarth) for his recent murders and the attack on Lulu Falconeri (Emme Rylan).Ryan’s not going to stop killing just because he found a patsy to frame; he’ll just make the killings look like suicides or accidents!

General Hospital is said to tape two-three months ahead, so we could see Valerie a few more times, but Ryan seems to like killing on holidays. He skipped Christmas, and Lulu’s attack was not near a holiday, but she just was in the way.

We haven’t seen the PCPD involving Valerie in the hunt for the serial killer, although she’s been along a couple of times to film crime scenes; but Ryan killing her seems to be a quick and convenient way for GH writers to explain the quick exit of the character, unless a recast is in the works, which is doubtful, no more than Valerie has been seen in GH storylines.

General Hospital Spoilers – Valerie To Be Killed Off?

It’s possible that Valerie may just be in the wrong place at the wrong time, and stumble onto Ryan doing something that would blow his cover as “Kevin Collins” and he might have to get rid of her! Stay tuned to GH and keep checking General Hospital spoilers frequently, to see if Valerie becomes a victim of Ryan, or they write her out off-screen.

#GeneralHospital #GH Spoilers: What Does The Future Hold For Sonny And Carly? @celebratesoaps https://t.co/Sp3SnUqtwm