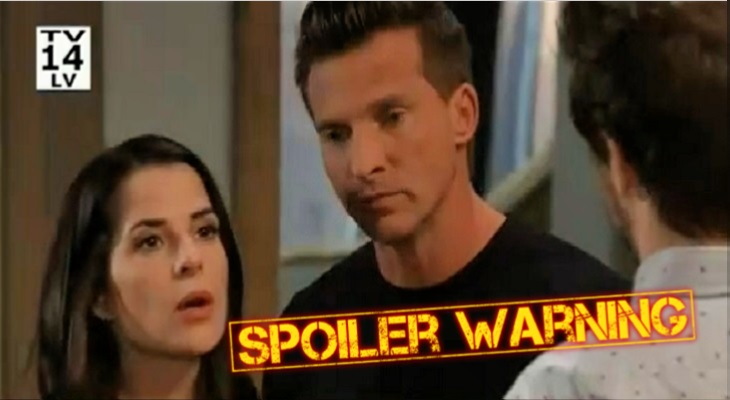 “General Hospital” spoilers for Monday, January 28, tease that Sam McCall (Kelly Monaco) will have a crucial meeting about Shiloh Archer (Coby Ryan McLaughlin). She’ll talk to Jason Morgan (Steve Burton) and Damian Spinelli (Bradford Anderson) about Shiloh’s apparent scheme. Sam will note that she told them Shiloh was lying all along. She’ll feel like she’s got all the proof she needs soon enough.

Sam will realize that they have to fight fire with fire. Shiloh’s being sneaky, so two can play at that game. “General Hospital” spoilers say Sam will want to get closer to Dawn of Day’s leader. She’ll think she can make Shiloh her target and hopefully protect the people she cares about.

In the meantime, Kristina Corinthos-Davis (Lexi Ainsworth) is in for a shock. Shiloh will approach her and mention a mystery he’s solved. Kristina will seem a bit on edge, so she may fear she’s anger Shiloh somehow. Of course, Kristina could also worry that her overprotective family members are becoming a nuisance.

Shiloh may confess that he had a nice, long chat with Alexis Davis (Nancy Lee Grahn). He might assure Kristina that it was no trouble. Shiloh’s still trying to ooze all the charm he can and make Kristina see him as some savior. She appears to view Shiloh as this perfect beacon, so he’s got her right where he wants her.

Other GH spoilers say Robert Scorpio (Tristan Rogers) will mull over the virus case and how “Dr. Kevin Collins” fits in. He believes “Kevin” lied to him, so he’ll want to know why. Robert will suggest that maybe the good doctor had a secret life, but Anna Devane (Finola Hughes) and Dr. Hamilton Finn (Michael Easton) may not buy that. They’ll have to put their heads together and figure out what this mess means.

In Lulu Falconeri’s (Emme Rylan) room at GH, Ryan Chamberlain (Jon Lindstrom) will be ready to take her out permanently. Lulu will look terrified as Ryan approaches to finish her off. He’ll urge Lulu not to fight it as he glares down at her, so a smothering attempt may be coming up.

The good news is Lulu will survive once more. The bad news is this could be a stumbling block in her recovery. Lulu may lose consciousness again and struggle to return to her loved ones. “General Hospital” spoilers say privacy will be important to Laura Webber (Genie Francis) on Monday. By the time she returns to Lulu’s room, Ryan may be gone and Lulu may be comatose again.

Laura might be told the hand squeezes were just involuntary spasms. That obviously wasn’t the case, but Laura won’t know what to believe anymore. She’ll just know her daughter has to get through this! Laura will likely reflect alone and pray for a miracle.

Meanwhile, Jordan Ashford (Briana Nicole Henry) will need a pep talk from her hubby. Curtis Ashford (Donnell Turner) will gladly give her one. Jordan will be frustrated over the lack of progress in the murder investigation, but Curtis will think they just have to keep at it. He’ll be convinced there’s something they’re just not seeing.

Jordan will count on Lulu to awaken and provide an eyewitness account eventually. Too bad Lulu won’t remember her attacks when she wakes up for good! We’ll give you updates as other details and rumors emerge. Stick with ABC’s GH and don’t forget to check Soap Opera Spy often for the latest “General Hospital” spoilers, rumors, updates and news.