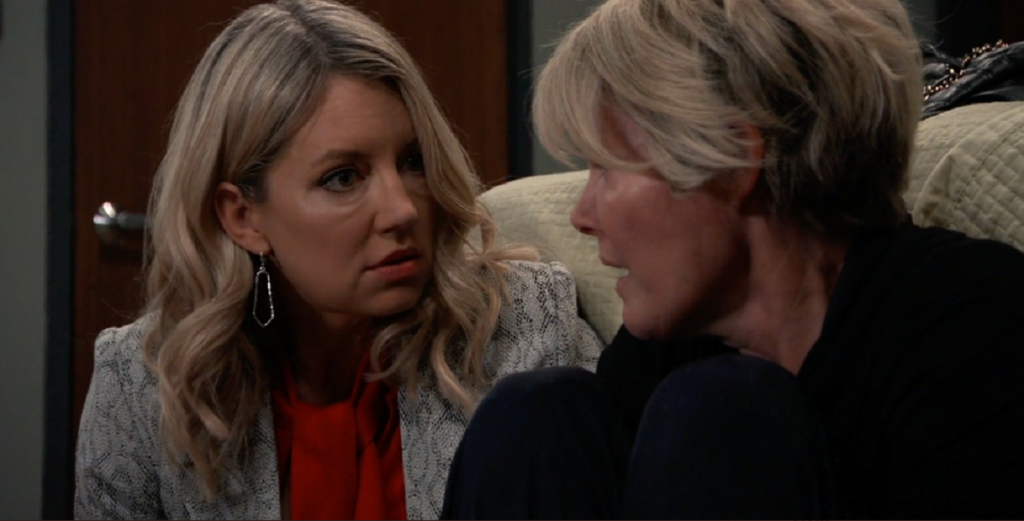 General Hospital (GH) spoilers reveal that a promo for the ABC soap opera has been released. Find out what to expect during the week of December 9. Two notable events are Elizabeth Webber’s (Rebecca Herbst) admission and Ava Jerome (Maura West) is stunned.

In a promo clip released by the network, Elizabeth is sitting down having a conversation with Franco Baldwin (Roger Howarth). She admits that she wants Franco back. The promo clip doesn’t show how he responds, but judging by the look on his face, he seems uncomfortable or uncertain of something.

In the latest issue of Soap Opera Digest, it is teased that Elizabeth will be thankful, while Franco ends up devastated later on.

General Hospital spoilers tease that something happens that will leave Ava completely stunned. We aren’t shown what that is in the weekly promo clip. However, we expect that it probably has something to do with Nikolas Cassadine’s (Marcus Coloma).

As fans recall from last week, Nina Reeves (Cynthia Waltros) went to visit Ava. She found the woman crumpled up on the floor, mumbling about Nikolas’ ghost telling her Kiki Jerome (Hayley Erin) was in hell. That is when Nina found a ring underneath Ava’s bed and she informed the psychiatric patient that she doesn’t believe that she was visited by a ghost. She is certain that Nikolas is alive and was there in the flesh to torture Ava and get information on Helena Cassadine’s (formerly Constance Towers) portrait.

General Hospital Spoilers: What Else to Expect

As for what else to expect in the upcoming week, GH spoilers reveal Jasper “Jax” Jacks (Ingo Rademacher) will get fed up with his houseguest. Sonny Corinthos (Maurice Benard) hopes for a miracle and Ned Quartermaine (Wally Kurth) is questioned.

What do you think is going to happen with Franco and Elizabeth in the upcoming week? What are your thoughts on Nikolas’ return storyline with Ava? What do you predict is going to take place with your other favorite characters? Fans will have to keep watching the ABC soap opera to see how these storylines develop.

The Bold and the Beautiful Spoilers: Promo Teases Hope Conflicted Between Thomas and Liam