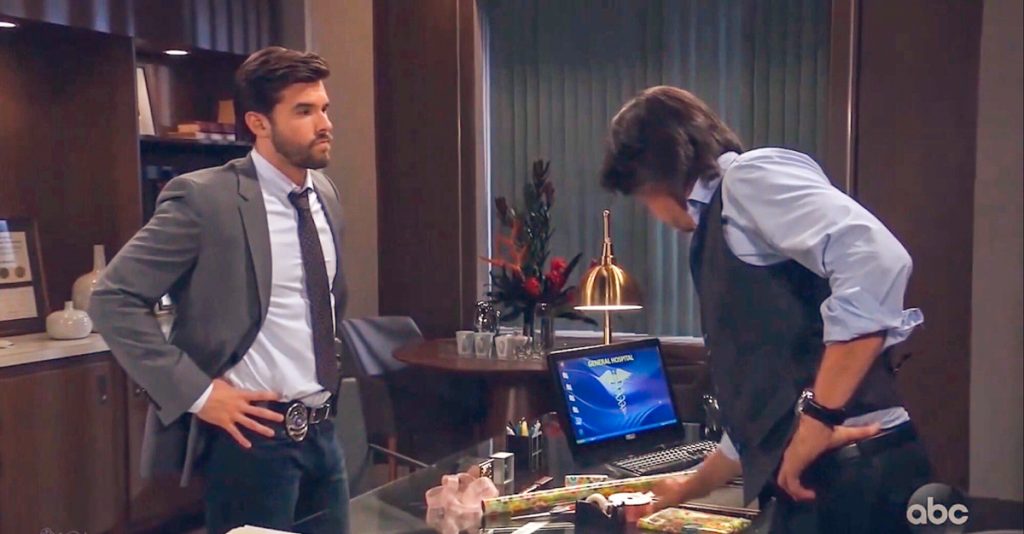 As General Hospital viewers will recall, Finn just recently found out he is a father, and shortly thereafter was tasked with caring for Violet Barnes (Jophielle Love) while her mother, Hayden Barnes (Rebecca Budig) went into hiding for her own safety at the forced insistence of Nikolas Cassadine (Marcus Coloma)!

Chase, on the other hand, recently learned his girlfriend, who he is very serious with, Willow Tait (Katelyn MacMullen) had thought she had become pregnant but it was a false alarm; however the two talked about having children and found they were on the same page – eventually, but right away was too soon, although if birth control failed, they would both be thrilled! Chase might be confiding that in his older brother and talking about fatherhood with him.

Chase adores his new niece nearly as much as Finn does, although fatherhood is brand new to him. Unclehood is brand new to Chase as well, and the idea of having children eventually is not something he had thought about until recently – very recently since he and Willow have become so serious. He may even be thinking about proposing to her, although he might postpone that question until a better time – maybe Valentine’s Day! He might talk to Finn about what he thinks about that possibility also, although he and Anna Devane (Finola Hughes) haven’t even set their date yet, although they have been engaged for several months now!

But then, their wedding planning process had been interrupted by Anna’s futile chase across Europe for her twin, Alexandra Marick (Finola Hughes)! Anna just recently has returned to Port Charles to Hayden having spent the night in her house with Finn, and finding out Finn was a father and meeting and getting acquainted with Violet, only to find out she and Finn have to care for her until and if Hayden returns! At least Chase and Willow have time to plan their parenthood, unlike Finn!

The subject may come up of trying to find Hayden, since Chase is a detective. However, Anna may have more reach if she were to try and find her since the WSB has a wider jurisdiction than the Port Charles Police Department does! Besides, trying to track her down when she is in hiding could cause more problems for Hayden and endanger her – although it is doubtful.

Valentin Cassadine (James Patrick Stuart) may have threatened Hayden, but he didn’t follow up on his threats. Instead, Nikolas staged a kidnapping which he rescued her from and scared her out of town! But, fatherhood will probably be the main subject discussed between the two brothers!