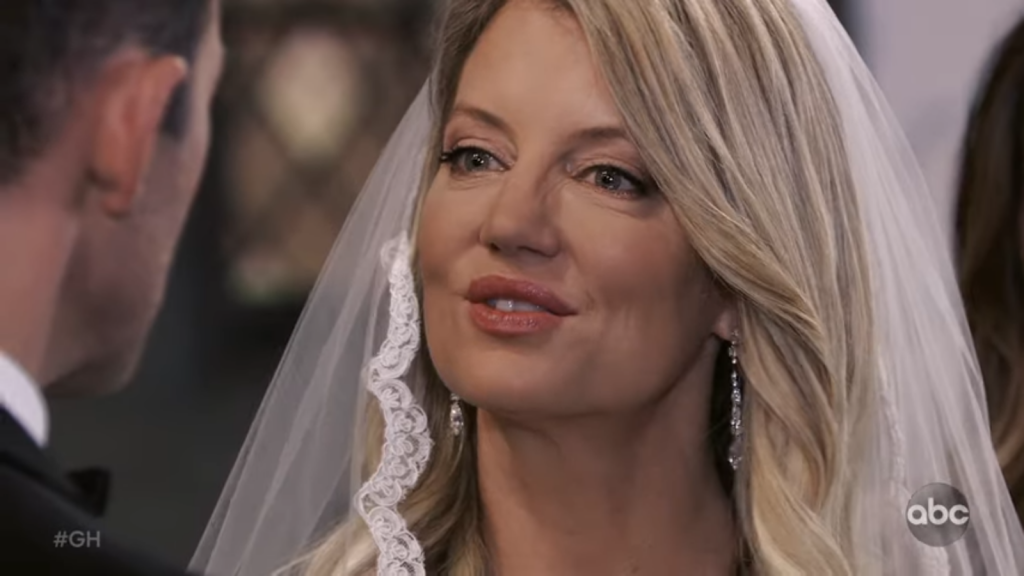 Welcome to your Wednesday, October 9th General Hospital (GH) recap! We begin our day at the Port Charles Police Department, where Damian Spinelli (Bradford Anderson) is asking commissioner Jordan Ashford (Brianne Nicole Henry) if he can analyze the recording equipment.

At the Corinthos mansion, Sam McCall (Kelly Monaco) and Jason Morgan (Steve Burton) are discussing with Sonny Corinthos (Maurice Bernard) who could have set them up. Sam and Jason bring up the fact that Peter August (Wes Ramsey) was on the dock that evening.

At Kelly’s Diner, Maxie Jones (Kirsten Storms) is trying to reach Nina to make sure she’s okay after the wedding disaster. Peter August (Wes Ramsey) says he has not heard from Valentin Cassadine (James Patrick Stuart) either.

At the coffee shop, Kim Nero (Tamara Braun) has hired a lawyer Martin Gray (Michael E Knight) to help represent Franco Baldwin (Roger Howarth). Kim says she’s not unsympathetic to Liz at all and Martin says they will need to be bold and loud about who ‘Drew” is.

Martin says that publicity is the best way to go, use current politics to bring up his need for “identity.” Kim does not think it’s right for Franco to be subjected to a procedure he has not agreed to.

GH Spoilers – Elizabeth Webber is in a panic about Frankendrew

At General Hospital (GH) , Scottie Baldwin (Kin Shriner) is telling Elizabeth Webber (Rebecca Herbst) that the procedure on his son could be dangerous. Suddenly Cameron Webber (William Lipton) appears at the door and says he will help get this approved if they put him on the stand.

Scottie tells Cameron to not mention he was drugged up during the kidnapping ordeal, they need to show Franco as a hero.

In the psyche ward at General Hospital (GH), Monica Quartermaine (Leslie Charleson) stops by to see Franco Baldwin (Roger Howarth). She apologizes that this is happening to him and he accuses her of planning this ordeal herself.

Monica says that at first, she wanted nothing to do with Jason, but she learned to love him. She says at the end of the day that family matters the most and he is important to them.

Sonny Corinthos (Maurice Bernard) wonders what Peter has been up to recently and brings up that he was Jason’s kidnapper. He has flown under the radar because he is Anna’s son.

Jordan Ashford (Brianne Nicole Henry) and Robert Scorpio (Tristan Rogers ) discuss the case and what a bad witness Daisy is. Daisy is the one that supplied the recording that is evidence against Sam.

GH Spoilers – Maxie is happy with her relationship with Peter

Peter August (Wes Ramsey) says her love makes him want to be worthy of her. She says shes glad that he will never betray her the way Valentin betrayed Nina.

Martin Gray meets with Franco and says he can use his sense of humor and personality to remain Drew. Robert meets with Monica and tells him that the real Drew has been declared dead from the plane crash. Spinelli tells Jordan and Sam that the recording that incriminates her, has been spliced. Kim goes to see Franco, they embrace and begin to kiss.

Jason runs into Maxie and Peter at the diner, where he fishes for information. He gets a call that they have arrested the man who helped Shiloh escape……..flash to preview

Either way, the baby swap secret must come out and it should soon! Stay tuned to General Hospital and keep checking General Hospital spoilers frequently for all the latest news, updates and developments!